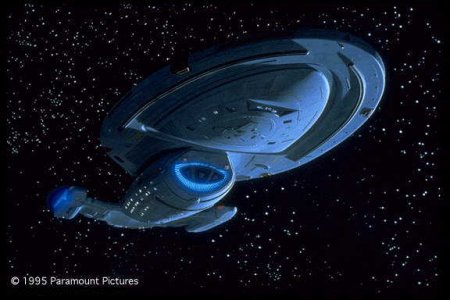 The principle of the Alcubierre warp drive. The idea is to create a local distortion of spacetime that will produce an expansion behind the spacecraft, and a contraction ahead of it. In this way, the spacecraft will be pulled towards its destination by spacetime itself. 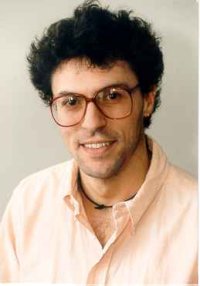 The Alcubierre warp drive is an idea for achieving faster-than-light travel suggested by the Mexican theoretical physicist Miguel Alcubierre in 1994.1 It starts from the notion, implicit in Einstein's general theory of relativity, that matter causes the surface of spacetime around it to curve.

Alcubierre was interested in the possibility of whether Star Trek's fictional "warp drive" could ever be realized. ("I was watching Star Trek and thought there must be a way to do this right," he said.) This led him to search for a valid mathematical description of the gravitational field that would allow a kind of spacetime warp to serve as a means of superluminal propulsion. Alcubierre concluded that a warp drive would be feasible if matter could be arranged so as to expand the spacetime behind a starship (thus pushing the departure point many light-years back) and contract the spacetime in front (bringing the destination closer), while leaving the starship itself in a locally flat region of spacetime bounded by a "warp bubble" that lay between the two distortions. The ship would then surf along in its bubble at an arbitrarily high velocity, pushed forward by the expansion of space at its rear and the contraction of space in front. It could travel faster than light without breaking any physical law because, with respect to the spacetime in its warp bubble, it would be at rest. Also, being locally stationary, the starship and its crew would be immune from any devastatingly high accelerations and decelerations (obviating the need for "inertial dampers"), and from relativistic effects such as time dilation (since the passage of time inside the warp bubble would be the same as that outside).

Could such a warp drive be built? It would require, as Alcubierre pointed out, the manipulation of matter with a negative energy density. Such matter, known as exotic matter, is the same kind of peculiar stuff apparently needed to maintain stable wormholes – another proposed means of circumventing the light barrier. Quantum mechanics allows the existence of regions of negative energy density under special circumstances, such as in the Casimir effect.

Further analysis of Alubierre's warp drive concept by Chris Van Den Broeck of the Catholic University in Leuven, Belgium,2 has perhaps brought the construction of the starship Enterprise a little closer. Van Den Broeck's calculations put the amount of energy required much lower than that quoted in Alcubierre's paper. But this is not to say we are on the verge of warp capability. As Van Den Broeck concludes: "The first warp drive is still a long way off but maybe it has now become slightly less improbable."

Miguel Alcubierre is a Mexican theoretical physicist. He was born in Mexico City and lived there until 1990 when he entered the graduate school at the University of Wales, Cardiff. In 1994, he received his PhD for research in numerical general relativity, using high-speed computers to solve Einstein's gravitational field equations. After leaving Wales in 1996, he worked for a time at the Max Planck Institute for Gravitational Physics in Potsdam, Germany, where he developed new numerical techniques to describe the physics of black holes that spin down due to collision. Since 2002 he has worked at the Nuclear Sciences Institute of the National Autonomous University of Mexico (UNAM), where he continues to conducts research in numerical general relativity.

Abstract: It is shown how, within the framework of general relativity and without the introduction of wormholes, it is possible to modify a spacetime in a way that allows a spaceship to travel with an arbitrarily large speed. By a purely local expansion of spacetime behind the spaceship and an opposite contraction in front of it, motion faster than the speed of light as seen by observers outside the disturbed region is possible. The resulting distortion is reminiscent of the 'warp drive' of science fiction. However, just as happens with wormholes, exotic matter will be needed in order to generate a distortion of spacetime like the one discussed here.