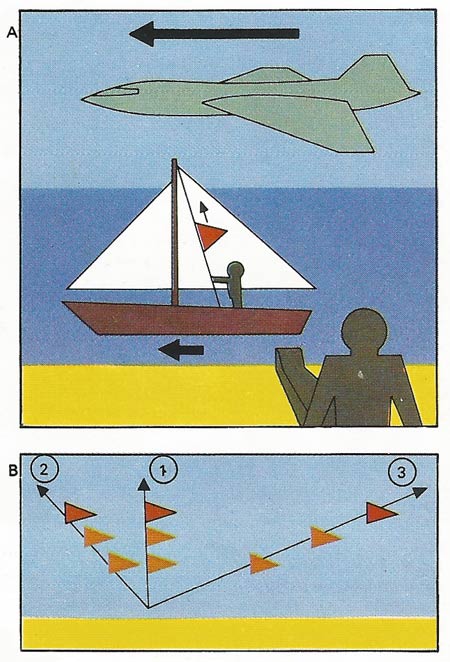 Relativity hinges on the simple idea that all motion is relative. A sailor in a yacht hauls a pennant up the mast [A]. To him, it appears to move vertically up [1]. To a man on the shore, the pennant appears to move forwards and up [2], because it is being carried past him as it is raised. A passenger in a passing aircraft sees the pennant disappearing rapidly behind him as it is raised [3]. Each observer records the same motion differently [B]; none is any more "correct" than the rest, for the planet on which all this happens is also moving. Their views confirm the relativity of all motion. 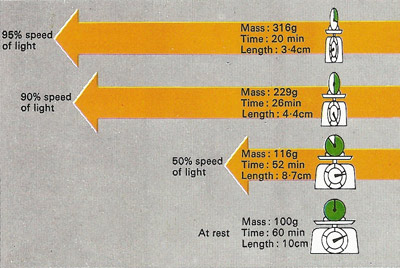 Einstein's special theory states that the measurement of mass, length and time depends totally on the relative motion of the measuring instrument and the object being measured. Compared with measurements made at rest, the mass will be increased, length decreased in the direction of motion, and time will be slowed. The effects are apparent only at extremely high speeds. At 90% of the velocity of light, mass more than doubles, length reduces by over a half and a clock takes an hour to record 26 min. At the velocity of light, mass would become infinite, length zero and time would slow to a complete stop - an impossible situation - which means that nothing can overtake the speed of light. 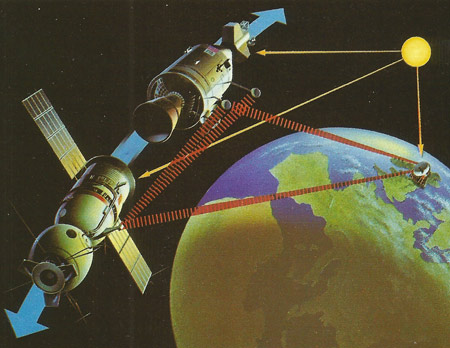 The special theory of relativity states that all uniform motion is relative and that the velocity of light is always constant. When two spacecraft pass each other in orbit, each traveling at 8 km (5 miles) a second as measured by radar at the tracking station below, the pilots detect that they are traveling relative to each other at 15km (10 miles) a second. If the spacecraft and the tracking station then measure the velocity of light from the Sun, they all get the same result. The spacecraft moving towards the Sun does not get a value that reflects its motion relative to any other body.

Low velocities accumulate by simple arithmetic. If a tank moving at velocity V fires a shell that leaves the gun at velocity v, then the shell will be traveling at V+v [A]. Addition of velocities near that of light (c) is different. If a hypothetical body moving relative to Earth at 0.5c had a supergun that fired a shell at 0.5c, the shell would appear from Earth to move at only 0.8c [B].

The orbit of Mercury puzzled astronomers because its perihelion (point of nearest approach to the Sun) continually shifted more than could be accounted for by the influence of the other planets. Einstein's general theory of relativity accounted for this movement. He explained that gravity distorts space so the orbits of the planets can not follow the simple orbits described by Newton.

A ray of light passing a rotating wheel bearing a line of people would appear to be straight to an outside non-rotating observer [A]. As it passes, the people are carried away from it by the movement of the wheel. To them the ray appears to bend [B]. This analogy shows that light bends in an accelerating system and therefore, by equivalence, in a gravitational field.

The bending of light by gravity was detected by photographing two stars normally [A] and in a solar eclipse [B]. As the light rays pass the Sun, they are bent by its field of gravity. As a result, the two stars appear to be farther apart [D] than usual [C]. 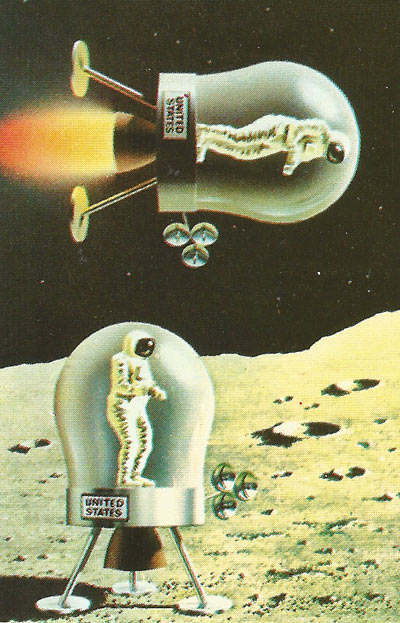 The principle of equivalence on which Einstein based his general theory of relativity states that gravity cannot be distinguished from acceleration. An astronaut is pulled to the floor of his stationary craft by gravity (bottom), in the same way as the floor is pushed towards him when the craft accelerates (top). The effects are identical; if he let go of an object it would "fall" in either direction. 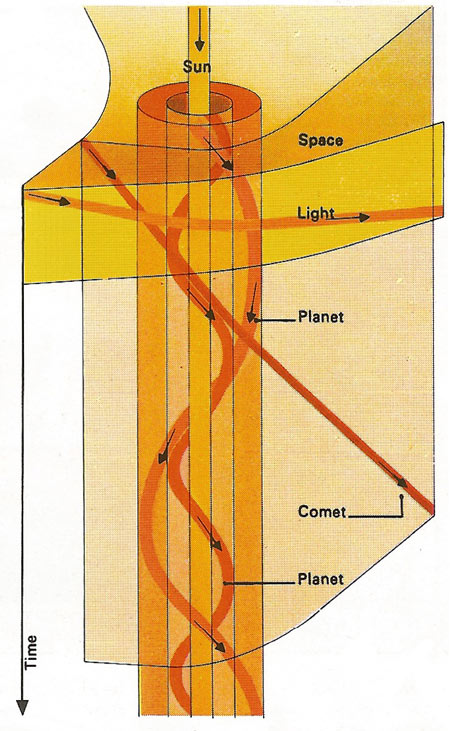 The dimension of time is as necessary to describe the location of any body as are the three dimensions of space. Einstein realized that if light always travels at the same speed, then space and time must therefore be equivalent. This diagram shows the Sun, planets and a comet moving in time as well as space. The varying velocity and widely changing path of the comet demonstrates the effects of the various gravitational fields on its motion, as Einstein correctly predicted in his general theory of relativity.

Relativity theory sought to eliminate from physics the idea of absolute space and time – that measurements of space and time were fixed and quite independent of the person measuring them. To Isaac Newton, absolute space and time existed as a backdrop against which he could formulate general laws about such quantities as acceleration and force. It was the genius of Einstein that through the special and general theories of relativity, show that such absolutes did not exist and that Newton's laws were not universally true.

Einstein's special theory of relativity (1905) was based on the idea that all uniform motion is relative – that is, an object can be seen to move uniformly only in relation to some stationary frame of reference. The classic experiment made by Albert Michelson and Edward Morley (1838–1923) determined that the speed of light is always the same in a given vacuum regardless of the speed of the source of light, of anyone observing it or of its wavelength. From these results Einstein deduced an astonishing set of conclusions. They showed that the mass, length and time interval of an object begins to move relative to an observer.

If say, an astronomer were to observe an extremely fast-moving spaceship, then his instruments would indicate that the mass of the spaceship had increased, that all lengths in the direction of the spaceship's motion had decreased, and time aboard was slower. Yet in the spaceship itself nothing would appear to have changed, although if the pilot looked back at the astronomer – who would be in the same motion relative to him – he would observe that mass, length and time there had changed in exactly the same way.

The light clock shows why time varies with motion and by how much. Normally the effects of special relativity are undetectable in an object until it is traveling at nearly the speed of light (300,000 km/s, 186,000 miles/sec), although very sensitive atomic clocks have been used to detect clocks "going slow" on aircraft in flight. The effects do become large for subatomic particles moving at close to the speed of light. Thus, because of their high speed, very fast unstable particles in cosmic rays live longer in the Earth's atmosphere than would otherwise be expected. Sub-atomic particles can be so speeded artificially that their masses are increased many thousandfold; particle accelerators have to be specially designed to allow for this effect.

It is Einstein's famous equation "E = mc2", relating the energy E and mass m of a moving particle with c in the velocity of light that shows ever greater energy will increase its mass. Because c2 is so large, only a small amount of mass is equivalent to a vast amount of energy. The conversion of mass into energy takes place in nuclear reactors, in atomic power stations, in nuclear weapons and in the Sun and other stars.

As the speed of a particle approaches that of light its energy increases indefinitely. But there is a limit to the amount of energy available to any particle and so it can never travel faster than light. The light barrier cannot be crossed, but there may exist particles that are always traveling faster than light. These particles, called tachyons, have been looked for but not yet found.

To take account of acceleration and of the force of gravity, Einstein's general theory of relativity (1915) incorporated the fact that all bodies fall equally fast at the surface of the Earth. In other words, the effect of the Earth's gravitational field is an intrinsic feature of the space around the Earth. Einstein described this feature in terms of curvature of space: the greater the distortion the greater the gravitational force. If time is included with space in this distortion it is possible to incorporate the idea that all motion is relative. The amount of space-time distortion caused by massive bodies can be quantified and it was Einstein's genius that showed how the amount of this curvature depends on nearby massive bodies.

Experimental observations, for example of small deviations in motions of planets from those predicted by Newton, make the general theory of relativity the most satisfactory of a whole range of similar theories. Confirmation also comes from the bending of the path of a ray of light near a massive body. Light has energy – and hence mass – and therefore moves in a curved path in the distorted space around the body. Such bending of light by the Sun was confirmed at an eclipse.


Holes in the heavens

All these effects involve weak gravitational fields and cannot put general relativity through the most searching test. When stars have used up their nuclear fuel they may evolve into extremely condensed objects in which strong gravitational fields occur and so they are good testing grounds for general relativity. It is postulated that very heavy stars collapse in on themselves so completely that the escape velocity on their surface is greater than the speed of light. As a result, nothing can ever escape them again – not even light – and so they are known as "black holes". Good candidates for black holes in our own Galaxy are the variable X-ray stars such as Cygnus X-1.