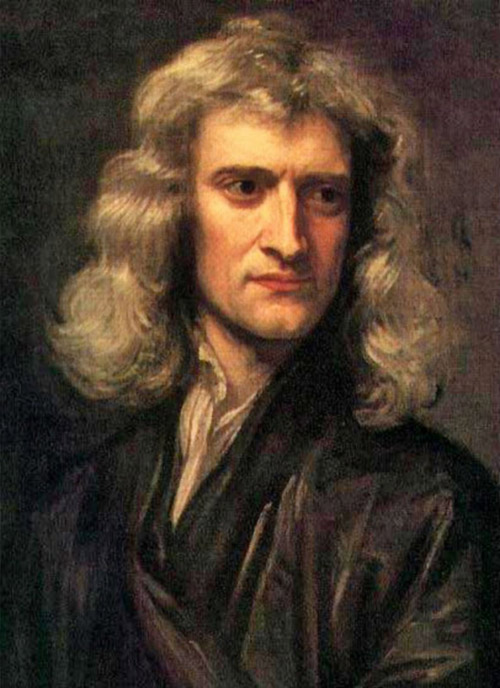 "If I have seen farther than others, it is because I was standing on the shoulders of giants."

According to Newton, were it not for the Earth, the Moon would move in a given period from A to A1, but because of Earth's pull, the actual movement is from A to A2. The Moon keeps'falling' towards the Earth, although it comes no closer to us. This ullustrates the law that a body will continue in a state of rest, or uniform motion in a straight line, unless acted upon by an outside force. This law was laid down in Newton's Philosophiae naturalis principia mathematica (1687).

Isaac Newton was an English physicist and mathematician, and one of the greatest scientists of all time. His major work on gravitation, mechanics, optics, and the calculus, was accomplished within a few years in the mid 1660s but was not published formally until 1687 in the Principia and 1704 in Optiks.

Newton organized our understanding of physical motion into three scientific laws, now known as Newton's laws of motion. Among other things, these laws explain the principle of rockets and how they are able to work in the vacuum of outer space. Newton's law of universal gravitation forms the basis of celestial mechanics and our understanding of the movement of satellites, both natural and artificial.

Newton was also the first to differentiate clearly between spherical aberration and chromatic aberration. Curiously, he held the view that all substances possessed the same dispersive power and that it was therefore impossible to eliminate or suppress chromatic aberration in any optical system consisting of lenses. While this conclusion no doubt delayed the invention of the achromatic lens, it had the compensatory effect of encouraging the development of the reflecting telescope, since mirrors were known to be inherently free of chromatic aberration. Newton himself was among the first to devise successful methods for casting mirrors and polishing them to the correct form. He produced his first reflector in 1668 – barely more than a toy, 16 centimeters (6 inches) long, with a mirror only 3.1 cm (just over an inch) in diameter.

Newton was one of the chief architects of calculus (though not in its modern form) and also discovered the binomial theorem. Interestingly, his most productive period was 1665-66, his so-called "miraculous year," when Cambridge University was closed because of the plague and Newton had to work at home. After publishing his Principia, the most important and influential scientific book ever written, his interests drifted toward theology, politics, and, for a while, alchemy. His last two decades were largely spent in acrimonious debate with Gottfried Leibniz, over priority in the discovery of calculus, and with the astronomer John Flamsteed.

Newton personally expressed almost no opinion on the question of whether life existed elsewhere in the universe, preferring to consider it a theological rather than a physical issue. In the second edition to the Principia he writes:

[I]f the fixed stars are the centres of other like systems, these, being formed by the like wise counsel, must be all subject to the dominion of the One.

Newtonian mechanics is a system of mechanics developed from Newton's laws of motion. It provides an accurate means of determining the motions of bodies possessing ordinary velocities. The motion of particles having very high velocities must be treated by relativistic mechanics, i.e. a system of mechanics based on the theory of relativity, as the change of mass of a particle with its velocity becomes important under such conditions.

Newton's law of gravity is the universal law, put forward by Isaac Newton in 1687, which states that the force of attraction between two bodies is proportional to the product of their masses and inversely proportional to the square of the distance between them. Although still applicable for most everyday and astronomical purposes, it has been supplanted by Einstein's general theory of relativity.