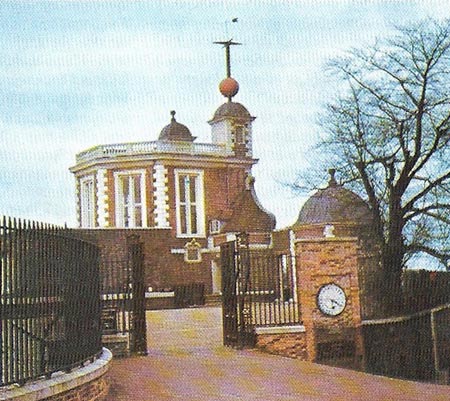 Flamstead House, in Greenwich Park, London, designed by Christopher Wren (1632–1723), is the site of the Royal Observatory, set up in 1675. The instruments have been moved to Sussex and the old Observatory is now a museum.

John Flamsteed was an English astronomer who was appointed the first Astronomer Royal (1675) by King Charles II in response to the need to find a way to accurately measure longitude at sea. Flamsteed got the job having recommended that the solution was to produce better tables of the movements of the Moon and the positions of the stars. The Royal Observatory at Greenwich was built for his use.

His Historia coelestis Britannica ("British Catalogue of Stars"), listing 2,935 stars, was the first major star catalogue compiled with telescopic aid, the most accurate of its time, and the standard work for many years. A preliminary and muddled version of it, published by Edmond Halley and Isaac Newton in 1712 without Flamsteed's approval, introduced the method of designating stars now known as Flamsteed numbers. Flamsteed's own edition appeared posthumously in 1723.

Flamsteed was born near Derby, in the county of Derbyshire, in August 1646. In his youth he devoted himself to mathematics and astronomy with such success that he attracted the attention of Sir Jonas Moore, and through him was appointed astronomer to the king in 1675, a capacity in which he was overworked and underpaid. The year after, Greenwich Observatory was built and Flamsteed began the series of observations that really marked the beginning of modern practical astronomy. He assembled the first reliable stellar catalogue, and provided the lunar observations which Isaac Newton used to verify his lunar theory. Extracts from Flamsteed's papers, found in Greenwich Observatory by Francis Bailey and published in 1835, brought to light a sharp dispute that had taken place between Flamsteed, Newton, and Edmond Halley with regard to he publication of the results of Flamsteed's work.

The Flamsteed number of a celestial object is a combination of number and constellation name (for example, 61 Cygni or 36 Ophiuchi) used to identify naked-eye stars that was adopted by Flamsteed in his stellar catalogue. The numbers were originally assigned in order of increasing right ascension (west to east) within each constellation, but due to the effects of precession they are now slightly out of order in some places. The designations gained popularity throughout the eighteenth century and are now commonly used when no Bayer designation exists. Not all naked-eye stars in the northern hemisphere have a Flamsteed number and, because Flamsteed's catalogue included only the stars visible from London, most stars in the far southern hemisphere are not covered by the system at all.