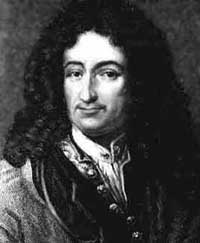 Gottfried Leibniz was a German philosopher, mathematician, and statesman who developed differential and integral calculus independently of Isaac Newton. Leibniz became interested in the late 1670s, when he met Christiaan Huygens and Robert Boyle. who described current problems in mathematics to him. His discovery of the calculus was later than of Newton, but it is the Leibnizian form which predominates today. He also invented a calculating machine and is considered a pioneer in mathematical logic.

In his Essais de théodicée (1710), Leibniz tackled the problem of evil and also spoke of God having created the "best of all possible worlds" ("world" here meaning not simply the Earth but the Universe as a whole). In Leibniz's philosophical view, the universe is composed of countless conscious centers of spiritual force or energy known as monads. Leibniz talks about the "compossible" elements of any possible world – elements that allow a logically consistent structure. He wrote extensively in favor of pluralism and believed in a continuous gradation of life-forms from the simplest to creatures more advanced, physically, intellectually, and spiritually, than ourselves.

Though one of the finest minds of his age, Leibniz was not immune to blunders: he thought it just as easy to throw 12 with a pair of dice as to throw 11.

The Leibniz harmonic triangle is a triangle of fractions that is related to the more famous Pascal triangle in a very simple way. Each row of the Leibniz harmonic triangle starts with the reciprocal of the row number (or the row number plus one depending on whether one starts counting from 1 or 0.) Every entry is the sum of the two numbers just below it. The entries can thus be computed sequentially left to right and top to bottom using subtraction instead of addition.