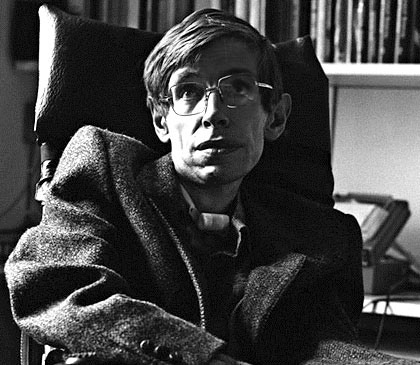 Stephen Hawking was an English theoretical astrophysicist and cosmologist famed almost equally for his work on black holes and the origin of the universe (propagated to a vast lay audience through his non-technical books, including A Brief History of Time and The Universe in a Nutshell) and the fact that he survived for five decades with motor neuron disease, an affliction with which he was diagnosed as a postgraduate at Oxford.

From 1980 to 2009 he held the Lucasian Chair of Mathematics at Cambridge University. He supplied a mathematical proof, along with Brandon Carter, W. Israel, and D. Robinson, of John Wheeler's "No-Hair Theorem" – namely, that any black hole is fully described by the three properties of mass, angular momentum, and electric charge. He also showed that black holes, especially tiny ones, can effectively evaporate as a result of the production of particle-antiparticle pairs in their vicinity, and, together with Ian Moss. has derived a "no-boundary" solution for the origin of space and time in the Big Bang.