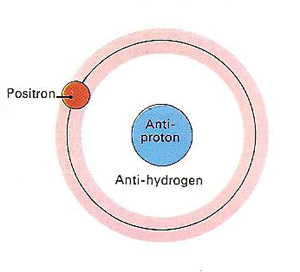 An atom (or, rather, anti-atom) of anti-hydrogen consists of a positron in orbit around an anti-proton.

Antimatter is material with properties equivalent to those of matter but with the quantum properties of the constituent subatomic particles reversed; for example, the particles' charges are opposite. Antimatter is composed of antiparticles. (Note that both the mass and energy of antimatter is positive not negative. (See negative mass.) Thus, antimatter does not give rise to antigravity.

In 1928 the English theoretical physicist Paul Dirac constructed a quantum theory governing the behavior of electrons and electric and magnetic fields. Although he was unable to appreciate it at the time, his theory required the presence of another particle possessing the same mass as an opposing electron but having a positive, rather than a negative, charge. The theorized particle was the electron's undiscovered "antiparticle." Dirac's theory was soon proven in subsequent experiments by the US physicist Carl Anderson in 1932, who photographed the curvature of particles as they passed through a magnetic field. It was Anderson who would rightly be credited with the discovery of the positron, the electron's antiparticle and the world's first undeniable proof of the existence of antimatter, and he was awarded a Nobel Prize, with Victor Francis Hess of Austria, for his work.

There is no inherent difference between matter and antimatter; the laws of physics apply almost equally to both. If they collide they annihilate one another and cease to exist. It was the start of the rewriting of an array of scientific textbooks. Since the beginning of physics everything everywhere was "matter – all that existed and all that we could see." With the addition of antimatter, the definition of what is constituted matter required narrowing. Antimatter was made of antiprotons were later discovered at the Lawrence Radiation Laboratory in California in the 1950s, antihydrogen was found in 1995, and the antihelium in 2011. Dirac had opened a quantum Pandora's box, and although it was Anderson who found the positron, its discovery was foreseen in a paper published a year earlier, written by Dirac, in which he predicted an as yet unseen particle that he prophetically named the "antielectron."

Antimatter happens to be rare in our universe. However, it is believed that in the Big Bang equal quantities of matter and antimatter were created. The fact that the universe now contains matter and not antimatter is known as the matter-antimatter asymmetry. To understand how this asymmetry came about is a major goal of contemporary particle physics and astrophysics. An experiment called the Alpha Magnetic Spectrometer, due to launch to the International Space Station in May 2011, is designed to shed new light on this issue.

Antimatter can be created briefly in laboratory high-energy collisions. The heaviest pieces of antimatter ever formed artificially are nuclei of anti-helium, each containing two anti-protons and two anti-neutrons. They were created and detected at the Relativistic Heavy Ion Collider (RHIC) in Upton, New York, in 2011. The next heaviest anti-element, anti-lithium, could in theory form solid antimatter at room temperature, but will be much harder to make.

Scientists have known for some time that charm mesons, which contain a quark and an antiquark, can travel as a mixture of their particle and antiparticle states. This mixture, known as a quantum superposition, results in two versions of the same particles, each with their own mass: a heavier and a lighter version. The difference in mass is tiny – about one hundred trillion trillion trillionth of a gram. But it's this tiny difference that researchers have now measured, confirming for the first time that the charm meson can oscillate between the two states (see related video).

Charm mesons are produced in the Large Hadron Collider (LHC)by smashing together beams of protons at very high energies. Even moving at close to the speed of light, the charm mesons travel on average only a few millimetres before they decay into other particles. By comparing those that decay after travelling a short distance with those that travel a bit further, scientists have been able to measure the key quantity that controls the speed of the charm meson oscillation: the difference in mass between the heavier and lighter versions of the particle. The measurement was possible only because of the number of charm mesons produced in LHC collisions. This, in turn, enabled the LHCb experiment to collect enough data to confirm the oscillation beyond the critical five-sigma level. And why is the discovery so important? Because it might shed like on physics beyond the Standard Model – our current best understanding of fundamental particles and forces.

Researchers will now want to learn more about the charm meson oscillation process. Is the rate of particle-antiparticle transitions the same as that of antiparticle-particle transitions? What controls the transitions? perhaps some as-yet unknown particle not included in the Standard Model. Beyond that there's the possibility that particle-antiparticle flips of the charm meson may shed light on one of the major outstanding problems in cosmology: why matter came to dominate antimatter in the universe in which we live. It's interesting that some of the biggest questions of all might be answered by some of the smallest measurements we can make.