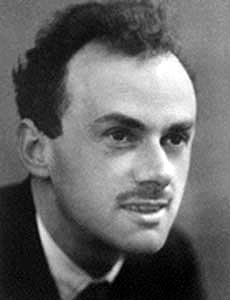 Paul Dirac was a British theoretical physicist who played a major role in the development of quantum mechanics and predicted the existence of antiparticles. He made his first great breakthrough at Cambridge University in 1928, when he found a wave equation for the electron. This explained aspects of the electron that had previously been observed but not understood, and, incidentally, is the only equation to appear in Westminster Abbey, where it is engraved on Dirac's commemorative plaque. Dirac's electron equation also made the astonishing prediction that there exists a previously unseen type of matter – a particle like the electron, but with opposite charge. This was remarkable at the time because only two subatomic particles, the electron and the proton, were known, and there was no suspicion that others might be waiting in the wings. The prediction was fulfilled four years later when the positron, as it is now called, was discovered by Carl Anderson.

Dirac shared the 1933 Nobel Prize in Physics with Erwin Schrödinger for their work in quantum theory. He was professor of physics at Florida State University from 1971 until his retirement.