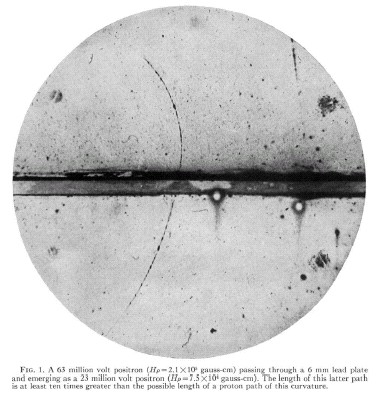 Anderson's cloud chamber picture of cosmic radiation from 1932 showing for the first time the existence of the anti-electron that we now call the positron. In the picture a charged particle is seen entering from the bottom at high energy. It then looses some of the energy in passing through the 6 mm thick lead plate in the middle. The cloud chamber is placed in a magnetic field and from the curvature of the track one can deduce that it is a positively charged particle. From the energy loss in the lead and the length of the tracks after passing though the lead, an upper limit of the mass of the particle can be made. In this case Anderson deduces that the mass is less that two times the mass of the electron. Caption credit: CERN. 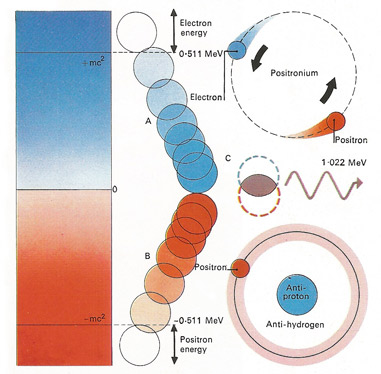 The existence of a particle equal in mass to an electron [A] but having negative energy was predicted by Paul Dirac. The discovery of the positron [B] confirmed this. If the two meet, they annihilate each other, releasing their combined mass-energy [C]. Positronium – an electron and positron in orbit – is known to exist briefly as is anti-hydrogen.

The positron is the positively charged antiparticle of the electron. A positron has the same mass (9.109 × 10-31 kg) and spin (½) as the electron, but opposite charge and magnetic moment. When a positron and electron meet they destroy one another instantly, in a process called annihilation and produce a pair of high-energy gamma rays.

The existence of the positron was first predicted by Paul Dirac in 1930 as a result of his work on the application of the special theory of relativity to quantum mechanics. The positron was discovered in 1932 by Carl D. Anderson,1 who also gave it its name.


discovery of the positron

The burst of particle discoveries in 1932 stimulated confidence in recognizing new particles. Investigators of cosmic rays had long used Wilson cloud chambers for tracing the particles in these rays. Carl Anderson obtained a remarkable picture of a particle passing through a lead plate placed across such a chamber. The path was more bent on one side than the other. The particle must therefore have entered the plate along the lee-bent part of the track, which indicated the direction in which the particle was moving. From this, it could be deduced that the particle had a positive charge. Measurements showed that the charge was about the same as that on an electron. The track was therefore due to a new kind of particle, a positive electron; the opposite or conjugate of the ordinary negative electron. Shortly afterwards, Blackett and Occhialini published many pictures of the same kind, confirming the significance of Anderson's single picture.

The importance of the discovery of the positron became evident at once through the brilliant theoretical researches of Dirac, published a couple of years earlier. He had shown that the mathematical equation for describing the properties of the electron could be combined with the special theory of relativity. He found that when the energy of an electron was calculated from this modified equation, it gave two answers, one positive and the other negative. The positive answer evidently corresponded to the ordinary negative electron. Dirac did not neglect the negative answer. He tried at first to identify it with the proton, the only other positive elementary particle known at the time, but the mass did not agree. His equation indicated that the mass of the positive particle must be the same as that of the negative electron. He suggested that in the universe there was a "sea" of negative electrons.

Occasionally in this sea there was a "hole", where there was no negative electron. He pointed out that this hole would move about, and in doing so, would behave like a positive particle. The idea that a moving hole could simulate a moving charged particle was subsequently utilized by William Shockley and his colleagues in the discovery of the transistor.

A year or two after the discovery of the positron it became clear that this was the indeed the hole in the sea of negative electrons which Dirac had conceived. This experimental proof of Dirac's theory confirmed its fundamental correctness.