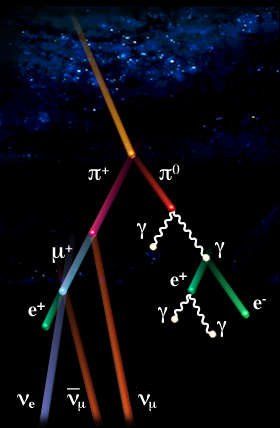 A cosmic ray shower. Cosmic rays in space are known as primary cosmic rays. When these collide with atoms and molecules in Earth's upper atmosphere, they generate showers of secondary cosmic rays. The initial collision produces pions, which quickly decay into muons, some of which decay further into electrons, positrons, and neutrinos.

Cosmic rays are subatomic particles and nuclei that move through space close to the speed of light. Their origin is one of the major unsolved mysteries of astrophysics, although researchers are moving closer to a solution. Cosmic rays consist of about 85% protons, 14% alpha particles (helium nuclei), about 1% electrons and other elementary particles, and a tiny smattering of nuclei heavier than helium. Their energies range from 10 million eV to one million trillion eV – equivalent, at the high end, to the punch of a major league baseball pitch.

Cosmic rays in space are known as primary cosmic rays and can be detected directly only by instruments above Earth's atmosphere. When they collide with atoms and molecules in the upper atmosphere, they generate showers (known as cosmic-ray showers or air showers) of secondary cosmic rays. The initial collision produces pions, which quickly decay into muons, some of which decay further into electrons, positrons, and neutrinos. Deceleration of the electrons and positrons in the atmosphere produces a flash of light that can be observed from the ground with special telescopes; however, most of the secondary cosmic-ray particles that reach sea-level are undecayed muons. Observations of these muons and of the aerial light-flashes from electrons and positrons provide information on the primary cosmic-ray that caused the cascade. Increasingly powerful equipment, in space, in the atmosphere, and on the ground, is helping unravel the enigma of galactic and extragalactic cosmic rays.

Anomalous cosmic rays have energies of about 107 to 108 eV and are thought to originate from neutral interstellar atoms that have been ionized by solar UV radiation after entering the heliosphere. Once ionized, these charged particles are carried on the solar wind (and associated magnetic field) back out to the shock created where the solar wind meets interstellar space. This shock accelerates the nuclei to cosmic ray energies, some of which then return to the inner Solar System.

It had been suspected that many of the galactic variety of cosmic rays were generated by shock waves from supernovae. Researchers had already shown that supernova remnants can accelerate electrons to cosmic ray energies, but there was no evidence that protons are accelerated by the same mechanism. Then in 2002, a Japanese team reported that it had for the first time associated a supernova remnant with cosmic ray protons. On several occasions, the team detected light showers due to protons coming from a patch of sky that contains a supernova remnant called RX J1713.7-3946.

The origin of extragalactic cosmic rays, the most energetic particles known, is also becoming clearer. Analyzing data from high-energy cosmic ray detectors in Japan and England, researchers announced in 2002 that they had traced the trajectories of several cosmic rays to four galaxies known to surround dead or dormant quasars, which almost certainly contain supermassive black holes. The finding fits with a scenario in which a spinning, supermassive black hole acts like a giant battery. Magnetic field lines in close contact with the rotating black hole generate a billion trillion volts, which accelerate charged particles to extremely high energies. In this theory, the quasar must be dormant. If the cosmic rays revved up by the black hole were to collide with intense radiation from an active quasar, their energy would be drained away.

The range of energies encompassed by cosmic rays is extremely wide, extending from about 107 eV to about 1020 eV in the case of the most energetic cosmic ray ever detected. The number of cosmic rays drop off precipitately at higher energies. Roughly speaking, for every 10% increase in energy beyond 109 eV, the number of cosmic rays per unit area falls by a factor of 1,000. However, looking at the spectrum more closely, a "knee" isevident at ~1015 eV and an "ankle" at about 1018 eV.

The origin of these changes in the steepness of the spectrum is still the subject of intense study, but it is assumed that they distinguish between populations of cosmic rays originating via different mechanisms. Current suggestions are that the cosmic rays with energies less than about 1010 eV are primarily solar cosmic rays produced in solar flares and coronal mass ejections, while those with energies between 1010 eV and the "knee" at 1015 eV are galactic cosmic rays produced in the shocks of supernova remnants.

The origin of the cosmic rays with energies between the "knee" and "ankle" is unclear. They are again thought to be produced within our own galaxy, but the energies are too high for them to be accelerated by the shocks of supernova remnants. The origin for the ultra-high energy cosmic rays (UHECRs) below the "ankle" is also a mystery, but many have suggested that these may be created outside of our Galaxy. If this is the case, the existence of UHECRs with energies above 5 × 1019 eV poses a problem for the theory of special relativity which predicts this energy as the theoretical upper limit to the energy of a cosmic ray. At energies beyond this so-called Greisen-Zatsepin-Kuzmi (GZK) limit, the cosmic rays should interact with the radiation of the cosmic microwave background within a distance of 150 million light-years. This would reduce the energy of the cosmic rays to below the GZK limit, and we should not observe such high-energy particles if they come from distant sources.