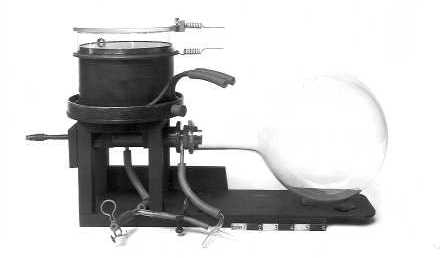 A cloud chamber is a device used in early particle physics experiments that records the passage of charged particles by the presence of droplets formed on ions left by their passage. Cloud chambers were first developed by Charles T. R. Wilson around 1911 for experiments on the formation of rain clouds. Wilson knew that water vapor condensed around ions. However, an alpha particle, for example, which had an electric charge, would leave a trail of ions as it passed through a gas. If water vapor condensed on these ions, the track of the alpha particle would become visible as a line of water droplets.

In its simplest form, a cloud chamber consists of a chamber containing saturated vapor and some liquid, one wall of the chamber (the window) being transparent, another retractable. Sudden retraction of this wall lowers the temperature, and the gas becomes supersaturated (and thus metastable). The passage of subatomic particles through the gas leaves a trail of ions that serve as seeds for condensation of the gas into droplets. These fog trails (condensation trails) may be illuminated by a beam of light against a black background photographed through the window.

The cloud chamber was further developed by Patrick Blackett for the observation of cosmic rays.