Sequence of events in a bubble chamber.

Sequence of events in a bubble chamber, continued. 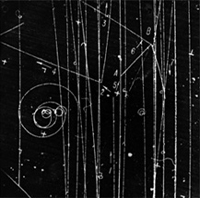 A bubble chamber is a device that reveals the tracks of charged particles by means of a visible string of bubbles that are left by the particles as they fly through a liquid. A bubble chamber consists of a vessel filled with a liquid heated nearly to the boiling point. When the pressure on the fluid is suddenly dropped, the fluid becomes overheated. At this moment electrically charged particles are fired through the chamber. The fluid begins to boil along the paths of the particles, developing tiny bubbles that can be photographed.

Bubble chambers superceded cloud chambers, which used a gas to record particle trails, but were themselves superceded in the 1980s by more advanced detection methods such as wire chambers and spark chambers.

The bubble chamber was invented in 1952 by Donald A. Glaser, who was awarded the Nobel Prize in Physics for his work in 1960.


How a bubble chamber works

The bubble chamber itself is a tank of liquid. The liquid is kept at a temperature above its normal boiling point by pressure – it is said to be super-heated. A narrow beam of high-energy particles from an accelerator enters the liquid, and some of the particles disintegrate. But whether they disintegrate or not, most of them leave a momentarily visible track behind them. Electrically-charged particles collide with liquid molecules, and give up some of their energy to them. The particles may knock electrons away from the molecules, leaving them electrically charged. In the heated, charged atoms and molecules surrounding the particles' paths, the liquid boils and forms a series of minute bubbles of vapor. Their formation and growth is aided by expanding the bubble chamber at this instant – the pressure is reduced and the bubbles can grow. For example, in the case of the large, 80-inch bubble chamber used in conjunction with the Alternating Gradient Synchrotron at Brookhaven in the 1960s, the volume of the chamber was rapidly expanded by moving a 250-lb piston a mere half of an inch in 0.015 sec.

The bubble chamber is illuminated, and the vapor trails are picked out in the light. Then they are photographed with cameras positioned around the chamber. In the case of the Brookhaven device, the bubble tracks formed were photographed by cameras which looked into the chamber through a 1,500-lb, polished glass window – the largest piece of lens-quality glass ever cast at the time.

Several different liquids were used in bubble chambers. Organic liquids such as propane and freon (CF3Br), and liquefied inert gases, xenon and helium, are some examples.

However, liquid hydrogen was used in the biggest bubble chambers. It was liquefied, and then refrigerated and pressurized to keep it in the liquid state. Typical pressures and temperatures in a liquid hydrogen bubble chamber were six atmospheres and -246°C (only 27°C above absolute zero but still above the normal boiling point of hydrogen). Pressure kept the liquid in its superheated state until particles entered the chamber and it was momentarily released to allow the vapor bubbles to grow. The great advantage of liquid hydrogen over all other liquids is that it contains only protons and electrons, making it possible to study the fundamental interactions between them.

The early bubble chambers were very small, but over the years they increased in size by a factor of around one million, with the largest chambers containing 40 m3 of liquid. More than 100 bubble chambers were built throughout the world, and more than 100 million stereo pictures were taken. The 80-centimeter Saclay bubble chamber at CERN, the 2-meter CERN bubble chamber, and the Big European Bubble Chamber (BEBC) took more than half of these pictures. The 80-ih (203 cm) bubble chamber at Brookhaven, mentioned above, was the largest detector of its kind when it began operation in 1963. This machine was also involved in the most famous discovery made using bubble detectors – the discovery, in 1964, of the omega-minus particle, which previously had been only theorized to exist.

Much bigger than the bubble chamber itself was is the equipment that surrounded it. At least one of the chamber walls is a transparent glass window, through which the chamber can be illuminated and photographed. The lighting and photographing arrangements are designed to allow the maximum amount of chamber to be visible. Often stereoscopic cameras are used to give three-dimensional images. This is useful because the disintegrating particles rarely stay in the most convenient plane. In large bubble chambers, provision was made for taking about 30 photographs per minute.

The only opening into the chamber led to an expansion line, so that the pressure could be quickly released. The beam of particles from the accelerator was let in through a porthole. Since the radiation from the accelerated particles was dangerous, the bubble chamber had to be shielded. The radiation shields were sometimes cooled with liquid nitrogen, because it was important to keep the bubble chamber cool.

An elaborate system of controls was necessary to coordinate the arrival of the beam, the expansion, and the cameras.

When bubble chambers first came into use, the photographs taken of them had to be scanned and measured with very primitive equipment. Eventually, digitized tables were made and and more elaborate semiautomated or fully automated techniques were developed. A large number of scanners was needed to cope with the increasing number of photographs, making measurements and pre-measurements more precise.

Computer technology grew in parallel with the increase in size and automation of the bubble chambers. At the beginning of the bubble-chamber era, slide rules and electromechanical calculators were used. But these were quickly replaced in the 1960s by electronic computers of increasing power. Similarly, the measured coordinates of points along the tracks were initially punched onto cards manually, but then semiautomatic projectors took over this task. The installation of mainframe computing capacity was driven by the demands of bubble-chamber physics. For example, the CERN mainframe central computers increased their speed and capacity by a factor of more than 1,000 during the bubble-chamber era.