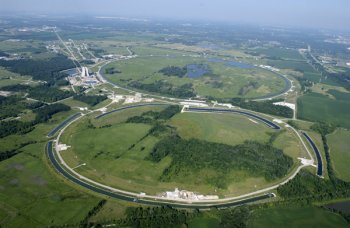 Fig 1. The particle accelerator complex at Fermilab, which included both a large synchrotron (the Tevatron) and a linear accelerator.. The Tevatron was shut down in 2011. Photo credit: Fermi National Accelerator Laboratory.

Fig 2. How a cyclotron works. 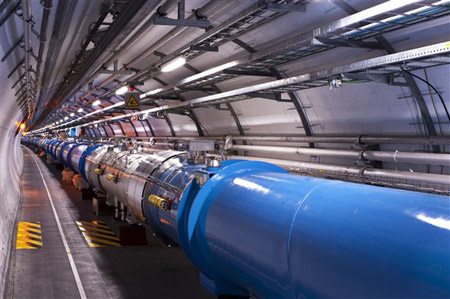 Fig 4. A section of the Large Hadron Collider showing the superconductor magnets.

A particle accelerator is a ring-shaped or linear (straight-line) device (see Fig 1) that accelerates charged particles to high velocities and energies and, through the collision of these particles, allows the study of matter at very small scales (less than 10-12 cm). Modern accelerators can produce collisions that mimic the conditions of the early universe. Creating tiny fireballs of high density and high temperature, physicists are able to produce the particles that were abundant in the early universe, a trillionth of a second after the Big Bang. The largest accelerator in the world is the Large Hadron Collider near Geneva, on the border between Switzerland and France.

An accelerator increases the velocity and hence the energy of charged particles through the use of alternating electric fields in an evacuated chamber. The particles must enter the high-frequency field as it begins increasing (negative particles) or decreasing (positive particles) in order to achieve the maximum energy increase. Magnetic fields are used to focus the particles into a narrow stable beam and to maintain the required curvature of the beam. As the particle velocity rise,s a relativistic increase in mass occurs.

In a linear accelerator, the particles travel in a straight line, usually accelerated by an electric field. In a cyclotron, particles are accelerated in a spiral path between pairs of D-shaped magnets with an alternating voltage between them. In a synchrotron, the accelerating voltage is synchronized with the time it takes the particle to make one revolution. A synchrotron consists of an (often very large) circular tube with magnets to deflect the particles in a curve and radio-frequency fields to accelerate them. The most advanced modern accelerators are colliders, in which beams of particles moving in opposite directions are allowed to collide with each other, thus achieving higher energies of interaction.

The betatron was an early type of accelerator used specifically to accelerate electrons (beta particles) to energies of up to several hundred MeV. The electrons run in a evacuated, annular tube and are kept on this orbit by a magnetic field array. They are accelerated by electromagnetic induction (transformer principle).

The cyclotron was conceived by Ernest O. Lawrence in 1929 as a way of obtaining high energy particles without having to use an extremely long linear accelerator. It was developed by Lawrence and his colleagues and students at the University of California in the 1930s.

In a cyclotron, charged particles such as protons or heavier ions are accelerated outwards in a spiral. Two large D-shaped dipole magnets produce a semicircular region of uniform magnetic field, pointing uniformly downward. The two D's are placed back-to-back with their straight sides parallel but slightly separated (see Fig 2). An oscillating voltage is applied to produce an electric field across this gap. Particles injected into the magnetic field region of a D trace out a semicircular path until they reach the gap. The electric field in the gap then accelerates the particles as they pass across it. The particles now have higher energy so they follow a semicircular path in the next D with larger radius and so reach the gap again. The electric field frequency must be just right so that the direction of the field has reversed by their time of arrival at the gap. The field in the gap accelerates them and they enter the first D again. Thus the particles gain energy as they spiral around. The trick is that as they speed up, they trace a larger arc and so they always take the same time to reach the gap. This way a constant frequency electric field oscillation continues to always accelerate them across the gap. The limitation on the energy that can be reached in such a device depends on the size of the magnets that form the D's and the strength of their magnetic fields.

Once the synchrotron principle was developed, it was found to be a much cheaper way to achieve high energy particles than the cyclotron and so the original cyclotron method is no longer used in experimental high-energy particle research. Many cyclotrons, however, are still used around the world for the production of radionuclides for nuclear medicine, in particle therapy to treat cancer, and in low-energy particle physics experiments.

A linear accelerator, also known as a linac, is a type of particle accelerator in which charged particles travel in straight lines through a vacuum chamber (see Fig 3). Early linear accelerators were electrostatic accelerators. In more modern types, a high-frequency, alternating electric field is used to accelerate the particles.

Final energies depend on the length of the chamber, and can reach several GeV (billion electron volts). The largest linear accelerator in the world, the Stanford Linear Accelerator (SLAC), is 3.2 km (2 mi) long and produces electrons and positrons with energies up to 50 GeV.

A synchrotron is a circular accelerator (sometimes called a synchrocyclotron) which has an electromagnetic resonant cavity (or perhaps a few placed at regular intervals around the ring) to accelerate the particles (Fig 4). Particles pass through each cavity many times as they circulate around the ring, each time receiving a small acceleration, or increase in energy. When either the energy or the field strength changes so does the radius of the path of the particles. Thus, as the particles increase in energy the strength of the magnetic field that is used to steer them must be changed with each turn to keep the particles moving in the same ring. The change in magnetic field must be carefully synchronized to the change in energy or the beam will be lost. Hence the name "synchrotron". The range of energies over which particles can be accelerated in a single ring is determined by the range of field strength available with high precision from a particular set of magnets.

To reach high energies, physicists sometimes use a sequence of different size synchrotrons, each one feeding the next bigger one. Particles are often pre-accelerated before entering the first ring, using a small linear accelerator or other device.


Development of the accelerator

The earliest accelerators, called electrostatic accelerators, consisted simply of vacuum tubes in which electrons were accelerated by the voltage difference between two oppositely charged electrodes. The Van de Graaff generator and Cockcroft-Walton machine (see Cockcroft, John) work on the same principle but are larger and more elaborate. A further extension of the same idea is the linear accelerator, or linac, which is a sophisticated machine with many scientific and medical uses. All straight-line accelerators are handicapped by the finite length of the flight path, which limits the particle energies that can be achieved.

A major breakthrough in accelerator technology came in 1920 when Ernest O. Lawrence invented the cyclotron. In this device, magnets guide the particles along a spiral path, allowing a single electric field to apply many cycles of acceleration. Soon unprecedented energies were achieved, and the steady improvement of Lawrence's simple machine has led to today's proton synchrotrons, whose endless circular flight paths allow protons to gain huge energies by passing millions of times through the electric fields that accelerate them.

Until the 1960s, all accelerators were fixed-target machines, in which the speeding particle beam was made to hit a stationary target of some chosen substance. But then physicists began to build colliders, in which two carefully controlled beams are made to smash into each other at a chosen point. Colliders are more demanding to build, but the effort is well worthwhile. In a fixed-target machine, most of the projectile particles continue the forward motion with the debris after impact on the target. In a collider, on the other hand, two particles of equal energy coming together have no net motion, and collision makes all their energy available for new reactions and the creation of new particles.