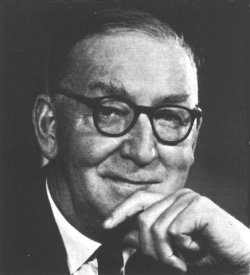 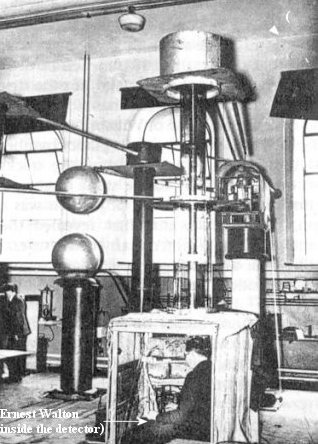 The Cockcroft-Walton machine, which produced the first artificial nuclear disintegrations in 1932.

John Cockcroft was a British physicist who pioneered the use of particle accelerators in studying the atomic nucleus. Cockcroft was born in Todmorden, Yorkshire, the son of a mill owner. After studying electrical engineering and physics at Manchester University and at Cambridge he became, in 1938, a Fellow of St. John's College, Cambridge and worked in the Cavendish Laboratory with Ernest Rutherford.

At this time there was considerable interest in the possibility of learning more about the properties of the atom by using changed particles such as alpha particles as bullets traveling at high speed to fire at the atom.

In 1919 Rutherford succeeded in transmuting atoms of nitrogen into atoms of oxygen using high speed alpha particles emitted by a naturally radioactive material. It was thought that particles accelerated to high speeds by artificial means could also enter the nucleus.

Realizing the possible importance of such methods, Cockcroft teamed up with another worker in the Cavendish Laboratory, Ernest T. S. Walton, to construct a machine that would be able to accelerate alpha particles to higher speeds than those of particles emitted from radioactive substances. The fact that such a machine would also accelerate protons (more efficient probes of the nucleus than alpha particles) and deuterons (see deuterium) to high speeds promised important results.

In 1929, Cockcroft and Walton designed and constructed an electrical circuit which provided several hundred thousand volts and which might form the basis of such a machine. In order to accelerate charged particles like protons they required a source of these particles and also a means of accelerating them.

Hydrogen gas was used as the source of protons. It was ionized by passing an electric arc through it in an ionization chamber. The electron was stripped from the hydrogen atom, and the hydrogen nucleus – the positively-charged proton – remained.

The protons drifted from the ionization chamber and traveled down the center of a long glass tube. This tube was pumped free of air, and along it were fixed metal cylinders at intervals. Each was connected to a high-voltage lead from a section of the high-voltage source. As a proton entered the glass tube, the negative voltage on the first metal cylinder accelerated the proton to a certain speed. It then traveled through the first metal tube and, on emerging, found an even greater negative voltage on the second metal tube, and was accelerated further. After passing through several tubes the proton emerged at high speed. The original high-voltage source was capable of generating about 700,000 V, and was connected in steps to five or six metal cylinders.

In 1932, Cockcroft and Walton used their machine to accelerate protons, and directed the beam of protons at a sample of lithium. This resulted in changing lithium atoms into two helium atoms. They had disintegrated – "smashed" – the lithium atom by means of artificially accelerated protons.

Cockcroft and Walton were thus the first to succeed in producing high speed protons in the laboratory and to show that these protons were capable of causing atomic disintegrations.

In 1936 Cockcroft became a Fellow of the Royal Society, and he was knighted in 1948. In 1946 he became Director of the Atomic Energy Research Establishment at Harwell. In 1951, Cockcroft shared with Walton the Nobel Prize in Physics awarded for their work in artificial acceleration of particles. In 1960, Cockcroft became the first Master of Churchill College, Cambridge. Cockcroft also made contributions to the development of nuclear reactors.