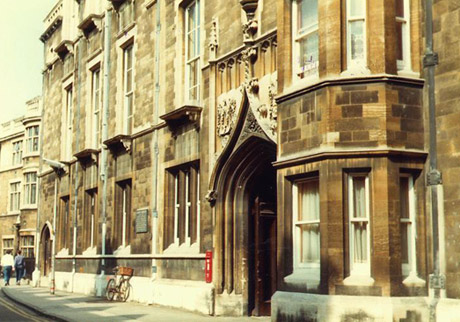 Ernest Rutherford (right) speaking to John Radcliffe in the Cavendish Laboratory in the 1935.

The University of Cambridge has long been distinguished as a home of scientific and mathematical discovery. The greatest single figure in this story of achievement was Isaac Newton with his massive contributions to both mathematics and physics. Much of Newton's experimental work was carried out in his private rooms in Trinity College, almost as a hobby. Many of the great scientists of the 17th and 18th centuries worked under similar circumstances; they were mostly gentlemen of private means who pursued their investigations because they were deeply interested in the reasons behind physical phenomena.

Physics itself was not taught as a full university subject in Cambridge until the middle of the 19th century. It was a few years after the institution of examinations in heat, electricity, and magnetism, in 1871, that it was decided that a professor of physics should be appointed and be provided with a lecture room and a laboratory.

The £6,300 which was required for the building was donated by the head of the Cavendish family, the Duke of Devonshire, whose ancestor, Henry Cavendish, carried out many famous experiments, including the one in which the mass of the Earth was accurately determined, and after whom the new laboratory was named.

In 1871, James Clerk Maxwell was elected as the first professor at the Cavendish, but the laboratory itself was not finally completed until 1874. Maxwell was already distinguished for his work on the nature of light waves, and on the kinetic theory of gases, before he went to Cambridge. Whilst he was at the Cavendish he did not add greatly to his original contributions. However, he established a laboratory where students were taught that properly conducted experiments that constituted the only true basis of physics, and he began the research school whose standards or experiments and theoretical work played a vital role in the birth of modern physics.

Maxwell's successor, Lord Rayleigh, was appointed in 1879, and continued work on electrical standards initiated by Maxwell as well as carrying out research into a wide range of subjects from telescopes to sound waves. By the time Rayleigh had left, after a period of five years, the Cavendish was well established as a leading research laboratory.

Under its new head, J. J. Thomson, it grew into an institution in which many of the world's greatest physicists were either to be trained or in which they were able to conduct their researches, Thomson himself, though no great experimenter, was able, with primitive and simple equipment, to unravel many of the secrets of the atom. He discovered the electron, and this discovery was the first step in the development of modern atomic theory.

Quite apart from his own experimental work, the intuition which developed under Thomson acquired world renown. One of the scientists who was attracted by the reputation of the Cavendish was the young New Zealander, Ernest Rutherford. Rutherford's work in atomic physics began when he joined Thomson at the Cavendish, and he continued it when he moved to Toronto and then to Manchester. He came back to succeed Thomson as professor of physics in 1918. Many of his famous experiments which helped explain the nature of radioactivity and the structure of the atom were conducted with apparatus of astonishing simplicity, in keeping with the traditions of the laboratory. As atomic science developed, however, the apparatus in the Cavendish did, of necessity, become more complicated and advanced in design, and included such items as particle accelerator equipment of J. Cockcroft and E. T. S. Walton, and of the Russian physicist L. P. Kapitza.

The list of Nobel Prize winners who passed through the Cavendish in the time of Thomson and Rutherford is imposing, the 50 years of their combined tenures marking a period in which the laboratory played a central role in the development of nuclear science.

Since that time the great traditions of the Cavendish, as a teaching and research institution have been maintained. Rutherford was succeeded, in 1938, by Lawrence Bragg, and he, in 1954, by Nevill Mott, both of whom carried out distinguished work in explaining the structure of solids. Between 1971 and 1974, under Mott's successor, Brian Pippard, the Laboratory was moved from its site in central Cambridge to a new green-field site in West Cambridge.