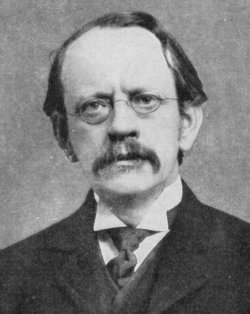 J. J. Thomson was an English physicist who succeeded James Clerk Maxwell as professor of experimental physics (1883–1919) at Cambridge. His discovery of the electron is regarded as the birth of particle physics. Thomson established that cathode rays, produced in a tube invented by William Crookes, consisted of a stream of particles. He went on to prove that these particles – electrons – were negatively charged and that their mass was about 2,000 times smaller than the smallest atom (hydrogen). He was awarded the 1906 Nobel Prize in Physics for his investigations into the electrical conductivity of gases.

Thomson and Francis Aston produced evidence of isotopes of neon. He transformed the Cavendish Laboratory into a major center for atomic research, attracting scientists of the caliber of Ernest Rutherford, who used Thomson's "currant-bun" model of the atom as a starting point for his own experimental investigations into the structure of the atom.