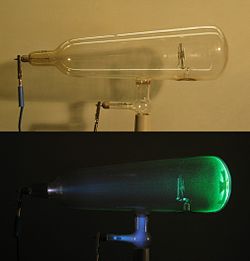 In the photographs shown here, the electrons travel in straight lines from the cathode on the left, shown by the shadow cast by the cross on the fluorescence on the right-hand wall. The anode is at the bottom.

William Crookes was an English physicist and chemist who discovered the element thallium (1861) and, by 1876, had devised the Crookes tube, a glass tube containing two electrodes and pumped out to a very low gas pressure. By applying a high voltage across the electrodes and varying the pressure, he was able to produce and study cathode rays and various glow discharges, and show that cathode rays were fast-moving, negatively-charged particles. The Crookes dark space is the dark region around a cathode making electrical discharges at low pressure. The Crookes tube was used in 1897 by J. J. Thomson to demonstrate the existence of the electron, and was used to generate X-rays.

Crookes also invented the radiometer (1875) in which four vanes suspended on a needle in a vacuum with one side black and the other side white are observed to rotate by the effect of incident light. He also invented the spinthariscope (1903) which reveals alpha particles emitted by radium as light flashes when they impact a zinc sulfide screen viewed under magnification. His interests included spiritualism, and he provided practical guidance for improving sanitation and artificial fertilizers.