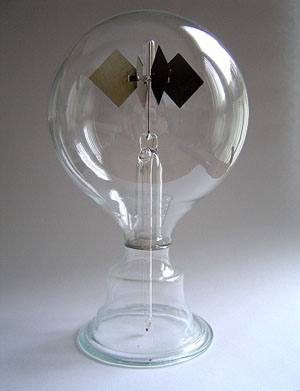 A radiometer is an instrument that detects and measures the intensity of radiant energy, especially that of infrared radiation. Satellites often carry radiometers to measure radiation from clouds, snow, ice, bodies of water, Earth's surface and the Sun.

The simplest kind of radiometer, called the Crookes' radiometer after its inventor William Crookes, consists of an evacuated glass bulb containing a pivot supporting vertical metal vanes blackened on one side. Incident radiation is more strongly absorbed (see absorption) by the blackened side of the vanes and the forces exerted on them by residual gas molecules initiate rotation proportional to the radiation intensity.