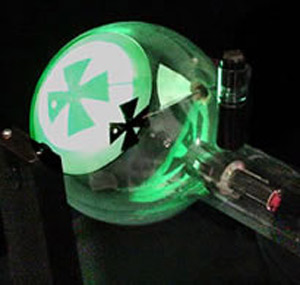 A cathode ray tube of the type known as a Crookes tube designed to show that cathode rays cast sharp shadows.

Cathode rays are a stream of electrons emitted from the negatively-charge electrode, or cathode, when an electric discharge takes place in a vacuum tube, i.e., a tube containing a gas at very low pressure.

The existence of cathode rays first became known to science in 1838 when the British experimenter Michael Faraday passed current through a vacuum tube and noticed an arc of light stretching almost from the cathode to the anode. This suggested that something was traveling in a straight line across the tube from the cathode – a "something" that became known as cathode rays. Scientists debated whether these rays consisted of waves, such as X-rays, or particles.

In 1879 William Crookes proposed that the cathode rays were "radiant matter" – negatively charged particles that were repelled from the negatively charged cathode and attracted to the positively charged anode. In Germany Heinrich Hertz observed the rays passing through thin sheets of gold, a seeming impossibility. Hertz had also found (wrongly) that the rays were not deflected by electric fields. Eventually, J. J. Thomson, working at the Cavendish Laboratory, repeated Hertz's experiment and showed that cathode rays consisted of streams of tiny negatively-charged particles, which he identified as electrons.