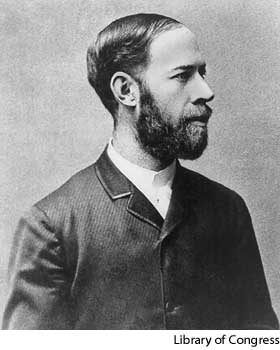 Heinrich Hertz was a German physicist who discovered radio waves, and demonstrated that heat waves (infrared) and light are also part of the electromagnetic spectrum.

Heinrich Hertz was born in Hamburg and studied at the universities of Munich and Berlin. At the latter, in 1880, he became assistant to Hermann von Helmholtz. In 1883 he began to lecture in Kiel, in 1885 was appointed professor of physics at Karlsruhe Technical College, and in 1889 succeeded Clausius at the University of Bonn.

Hertz greatly advanced the science of electromagnetism, continuing the work of Michael Faraday and James Clerk Maxwell, and was an ingenious experimenter. He discovered, broadcast (c. 1886), and received the radio waves predicted by Maxwell. He showed also that they could be reflected, refracted, polarized, and diffracted much as light, and that they traveled at the same speed though their wavelength was much greater. Hertz also discovered in 1887 that an electric spark occurs more readily when the electrodes are irradiated with ultraviolet light (the Hertz effect), and consequence of the photoelectric effect.

Hertz died from blood poisoning at the age of 36, and did not live long enough to see Marconi turn radio transmission into a worldwide system of communication.

The SI unit of frequency, the hertz, is named after him.