Marconi experiments in the attic of his home. His early experiments led to sound broadcasting as we know it today. 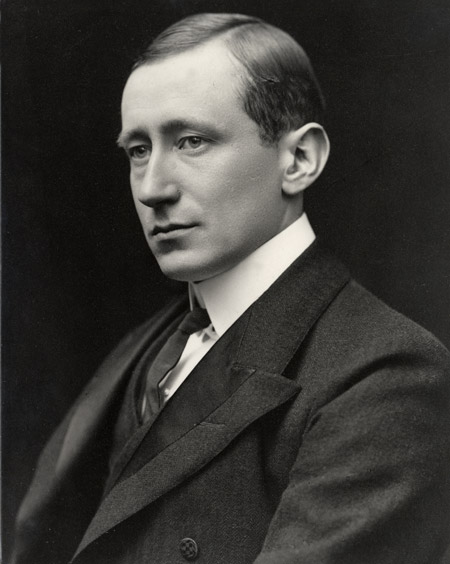 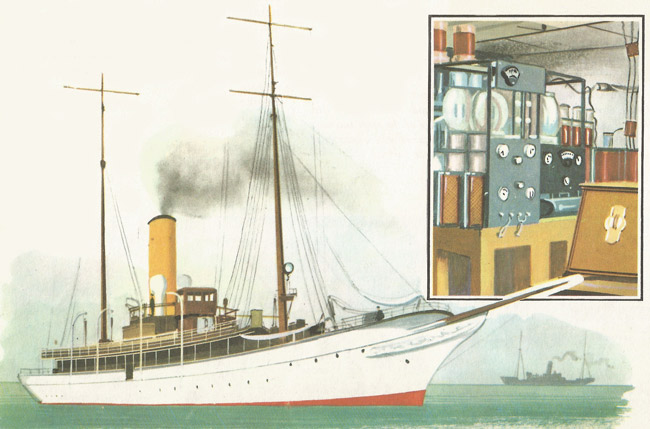 Marconi's yacht Elettra, which he fitted out as a floating laboratory. On the right is shown the part of the specially fitted cabin.

Guglielmo Marconi was an Italian inventor and physicist, awarded (with K. F. Braun) the 1909 Nobel Prize in Physics for his achievements. On learning of Hertzian waves (radio waves) in 1894, he set to work to devise a wireless telegraph. By the following year he could transmit and receive signals at distances of about 2 km. He went to the UK to make further developments, and in 1899 succeeded in sending a signal across the English Channel. On Dec 12, 1901 in St. John's, Newfoundland, he successfully received a signal sent from Poldhu, Cornwall, thus heralding the dawn of transatlantic radio communication.

Nowadays people take wireless, or radio as it is generally known, very much for granted. But in Marconi's day few believed it would ever by very important. Many scientists before Marconi had worked on the basic idea, including Michael Faraday, James Clerk Maxwell, and Heinrich Hertz. Maxwell had studied electromagnetic waves (waves made up of electric and magnetic forces) and had foretold that these waves would be able to be sent through space, and detected at a distance place without any wires joining the sending apparatus to the receiving apparatus. Because of the lack of connecting wires the waves came to be called wireless waves.

Hertz sent the first wireless waves through space in his laboratory in 1887. But no one at this time saw any practical use for this discovery. Marconi realized that these waves could be used as a means of communication, and it was his stubborn belief in this theory, his financial flair, his inventive genius, and his capacity for hard work that bought his great dream of communication through wireless into being.

Marconi was born on Apr 25, 1874, in Bologna, Italy. His Italian father was a well-to-do businessman, and his mother was an Irishwoman, who taught her son to speak English at an early age. This was later a great help to him. He was a delicate child, whose favorite occupation was reading the books in his father's scientific library. He went to school in Florence, then in Leghorn, and soon developed a passion for electricity. His interest in science was so great that his mother arranged for him to have special lessons from a physics teacher at the University of Bologna. Marconi set up a laboratory in the attic of his home, where he did electrical experiments with accumulators, bells, and yards of copper wire.

When Marconi was 20 he read about Hertz's experiments with wireless waves. Inspired by this, he set to work, and the next spring, when he was just 21, the wireless telegraph was born. From a transmitter in the attic Marconi sent the Morse letter 's' by wireless to a receiver in his garden.

Later Marconi developed his aerial-earth system, (still in use today) which strengthened his signals so that he could send them over several miles.

Marconi then tried to interest the Italian government in his invention. But they showed no enthusiasm and, encouraged by his mother, Marconi came to London in 1896. Here he was luckier. The British Post Office offered him help and Marconi filed his first patent, protecting his invention, in Jun 1896. The next year, using balloons and kites to increase the height of his aerial, he gave several successful demonstrations, sending signals nearly 9 mi across the Bristol Channel. He steadily improved his apparatus, and, although many people still scoffed at his ideas, he set up a company with the help of an engineer cousin. In 1899 a wireless station was established at South Foreland which was able to communicate with Wimereux in France, some 31 mi away, while British battleships, equipped with Marconi's apparatus, exchanged messages over distances of 75 mi. In Sep of that year two ships were equipped by Marconi to report to newspapers in New York on the yacht race for the America's Cup – this roused interest all over the world. The next year a company was formed by Marconi for the installation and operation of services between ships and land stations. In that same year he filed his famous patent No. 7777, for his improvements in tuning wireless transmitters and receivers.

A great problem now had to be overcome. Wireless communication over comparatively short distances had proved a success; could it also succeed between places thousands of miles apart? There were many technical difficulties, but by 1901 Marconi hoped he had found an answer to the problem. He set up a transmitting station at Poldhu in Cornwall, and sailed to Newfoundland, where he built his receiving station near St John's. Amid fierce gales he flew his aerial on a kite, and just after noon on Dec 12 he heard the clicks that proved that communication was possible between any two places on Earth. This event was the start of the enormous expansion in wireless communications that took place in the next half-century. It aroused world-wide interest, and from that time on steadily advances were made.

In 1904 Marconi set up a news service by wireless between England and the United States, and a few years later a public service was opened as well. In 1912 the liner Titanic was wrecked on an iceberg during her maiden voyage. She was equipped with radio, and her distress signals brought help much more quickly than earlier methods could have done. Another event that brought wireless communication into the news was the arrest of the murderer H. H. Crippen, who was recognized on board a ship sailing from England to Canada. The news was telegraphed to shore, and when the ship docked Crippen was arrested.


voices in the sky

So far, all Marconi's communication through wireless had taken place in Morse code; he was determined to send voices and music through the air in just the same way. He experimented continuously, and in about 1914, with the aid of the Fleming thermionic valve, he managed to speak over the air. In 1919 spoken words were broadcast between Ireland and America; the Marconi company started broadcasting from Chelmsford in Britain in 1920, and public broadcasting soon spread to many countries.

For several years, Marconi was involved with the possibility of radio communication with extraterrestrial intelligence. His first public comments on the subject appeared on the front page of The New York Times on Jan 20, 1919, under the headline "Radio to Stars, Marconi's Hope." Marconi expressed his belief that there may be many inhabited worlds, that mathematics might serve as a common language of communication (see mathematics as a universal language), and that unexplained signals he had detected might have been sent by intelligent beings in space. A year later the Daily Mail in London reported that Marconi had found "very queer sounds and indications, which might come from somewhere outside the Earth," including Morse code. Subsequently, The New York Times followed up the story, stimulating comments from a number of scientists and engineers around the world. Although Marconi said nothing more on the subject, the possibility of radio communication with extraterrestrials created much public excitement at the coming close opposition of Mars in 1924. By this time, most professional astronomers agreed that there was little chance of finding advanced martians. But one who had not yet given up hope of making contact with the inhabitants of the Red Planet was David P. Todd.

During his life Marconi was honored in all parts of the world. In 1909 he won the Nobel Prize in Physics. In 1929 he received the title of marches (marquis) and was nominated to the Italian senate. He was honored by many scientific associations. He died in Rome on Jul 20,1937, and was given a state funeral by the Italian Government.

communication with Moon and planets