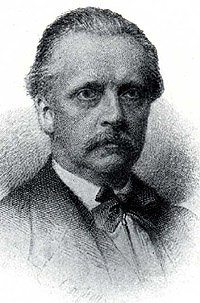 Hermann Helmholtz was a German physiologist, anatomist, and physicist. In the course of his physiological studies he formulated the law of conservation of energy (1847), one of the first to do so. He was the first to measure the speed of nerve impulses and invented the ophthalmoscope (both 1850). He also made important contributions to the study of electricity, acoustics, optics (expanding the three-color theory of Thomas Young), and non-Euclidean geometry.

Helmholtz was an early advocate of the idea of panspermia. In a public lecture delivered in 1871 he said:

Who can say whether the comets and meteors ... may not scatter germs of life wherever a new world has reached the stage in which it is a suitable dwelling place for organic beings? We might, perhaps, consider such life to be allied to ours, at least in germ, however different the form it might assume in adapting to its new dwelling place.

Criticizing this hypothesis, which was put forward independently in the same year by William Thomson (Lord Kelvin), Frederick Zöllner argued that meteorites reach such high temperature on falling through the Earth's atmosphere that any organisms contained within them would be incinerated. In reply, Helmholtz pointed out that the interior of a meteorite would remain cool during its passage through the air and, in any case, organisms on the surface might be thrown free before the temperature became intolerable.