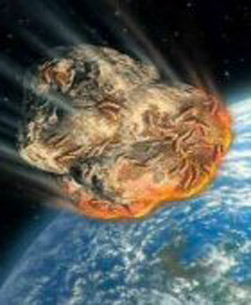 With the discovery of meteorites on Earth which almost certainly came from the Moon and Mars, it has become relevant to ask whether prebiotic chemicals and even primitive life have been routinely transported between different worlds of this and other planetary systems. The significance of certain features and substances found within the SNC meteorite, ALH 84001, remain a matter of debate (see martian "fossils" controversy). However, it is clear that if rocks from other worlds have arrived here, then the possibility exists of terrestrial material having been transported elsewhere. As Wallis and Wickramasinghe say in a 1995 paper:1

The mass of escaping ejecta from the presumed 10-km object that caused the 180-kilometer Chicxulub crater ... amounted to ~300 Mm3, of which one third may have been rock and 10% higher-speed ejecta that could have transited directly to Mars... The survival and replication of microorganisms once they are released at destination would depend on the local conditions that prevail. Although viability on the present-day martian surface is problematical, Earth-to-Mars transfers of life were feasible during an earlier 'wet' phase of the planet, prior to 3.5 Ga ago. The martian atmosphere was also denser at that epoch ... thus serving to decelerate meteorites, as on the present-day Earth. Since the reverse transfer can occur in a similar manner, early life evolution of the two planets may well have been linked.

Exchange of material between the Earth and Mars would have been especially common during the first 800 million years of the Solar System's existence, that is, between 4.6 and 3.8 billion years ago (see Earth, early history), when major impacts with asteroids and comets were frequent. If simple organisms arose on either world during this time – and there is tentative evidence of terrestrial microbial life dating back 3.85 billion years – they may have been transferred inside ejected rocks to the neighboring planet and formed a colony on arrival (see cosmic collisions, biological effects). There are even plausible reasons to suspect that life may have evolved first on Mars and then, via ballistic panspermia, spread to the Earth (see Mars, life). Or, there may have been a regular cross-fertilization of microorganisms between the two worlds. Conceivably, Venus, too, was involved in the transference of life when its surface conditions were more clement than they are today. One consequence of the possibility of such cross-fertilization is that if life, or evidence of past life, were found on Mars, it would not immediately imply independent biological evolution.