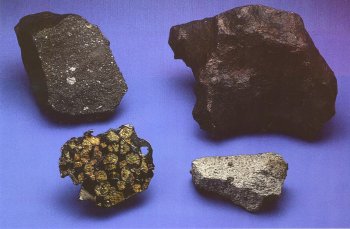 A meteorite is the solid portion of a meteoroid that survives its fall to Earth, or some other body. Meteorites are classified as stony meteorites, iron meteorites, and stony iron meteorites, and further categorized according to their mineralogical content as shown in the table (see individual entries for each of these types). They range in size from microscopic to many meters across. Of the several tens of tons of cosmic material entering Earth's atmosphere each day, only about one ton reaches the ground – an object's survival chances depending on its initial mass, speed of entry, and composition. Incoming meteoroids with masses between 10-6 g and 1 kg tend to burn up completely as meteors. Smaller objects are dramatically slowed down without being incinerated and fall as a continuous, gentle, invisible rain of micrometeorites. Larger objects, up to 1,000 tons, are decelerated to a lesser extent, fall through the lower atmosphere at high speed, causing them to glow brightly as a fireball.

Rumors of fiery objects briefly lighting up the heavens and the impromptu arrival of rocks that apparently dropped out of the blue (or the black) had contributed to folklore for thousands of years. But the origin of these "sky stones" remained a matter of great controversy. One idea, popular among 18th-century scientists, was that they were hurled out of volcanoes. Many ordinary folk, though, were of a different opinion. They thought that sky stones really did come from the heavens – an idea considered absurd by most astronomers and geologists. All the same, it was a tricky problem to resolve. Sky stones would just turn up unpredictably, so there was only the occasional eyewitness report by a startled onlooker to offer any kind of lead.

Then came the big breakthrough. A football-sized rock blazed out of the sky on a winter's day in 1795 and landed right in the middle of a field in Yorkshire, England, narrowly missing an astonished plowman. Contacted by excited villagers, the playwright, journalist, and soldier Major Edward Topham, the local squire of Wold Newton, took charge of the strange missile and conveyed it to London. There he showed it to his friend Sir Joseph Banks, the president of the Royal Society, who commissioned a chemist and a mineralogist to examine the rock. Asa result of their studies the remarkable truth began to dawn that sky stones really do arrive on Earth from the depths of space. A monument, an isolated brick obelisk on Wold Cottage Farm in Wold Newton, commemorates the great event: "Here, On this Spot, December 13, 1795, fell from the Atmosphere, An Extraordinary Stone." An extraordinary stone indeed, an alien stone – a meteorite.

A series of eminent chemists, including Berzelius, Wöhler and Berthelot, first identified the presence of organic materials in carbonaceous chondrites in the mid-nineteenth century. Wöhler's premature declaration that the substances he had identified were the products of extraterrestrial life seemed to be confirmed by the analysis by S. Cloëz of samples from the Orgueil meteorite which revealed the presence of substances analogous to lignite. However, hopes of discovering actual living matter in meteorites were dashed by the experiments of Pasteur and later scientists which found no evidence of extant microorganisms.

It was announced in 2022 that all five of the bases that store information in DNA and RNA have been founded in meteorites recovered over the past century. These nucleobases – adenine, guanine, cytosine, thymine, and uracil – combine with sugars and phosphates to make up the genetic code of all life on Earth. Whether these basic ingredients for life first came from space or instead formed in an terrestrial soup of chemicals is still not known. But the discovery adds to evidence that suggests life’s precursors originally came from space.