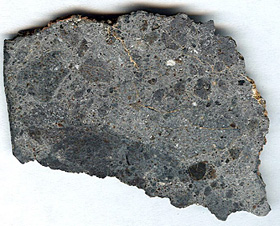 Howardite is a type of achondrite and a member of the HED group of meteorites believed to have originated on the large main-belt asteroid 4 Vesta. Howardites are named after the English chemist Edward Howard (1774–1816).

Howardites are polymict breccias, which means they consist of broken and angular rock fragments, known as clasts, embedded in a matrix of a different material. The clasts are mostly eucritic and diogentic in nature, probably indigenous to Vesta, although mixed in with these are rocks of a different origin – so-called xenolithic inclusions – most notably dark clasts that match the composition of carbonaceous chondrites, together with impact melt clasts. These ingredients suggest that howardites come from at or near the surface of Vesta, in other words they are samples of the asteroid's regolith, which were subsequently altered and ejected, possibly during the impact that created the very large crater known to exist near Vesta's south pole.