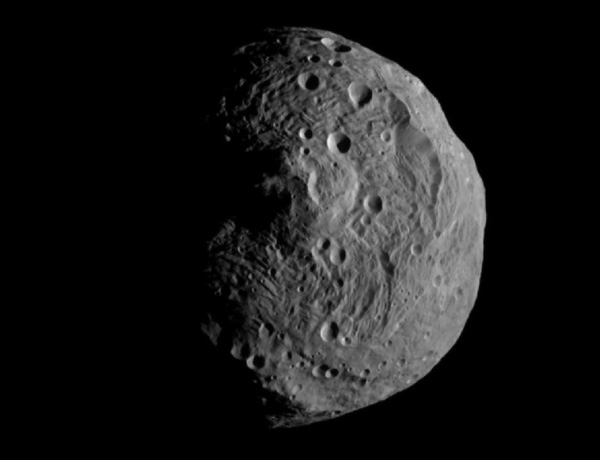 Vesta revealed as never before in this first image of it taken from orbit by the Dawn spacecraft. 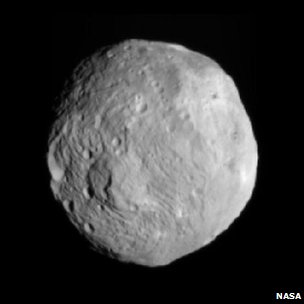 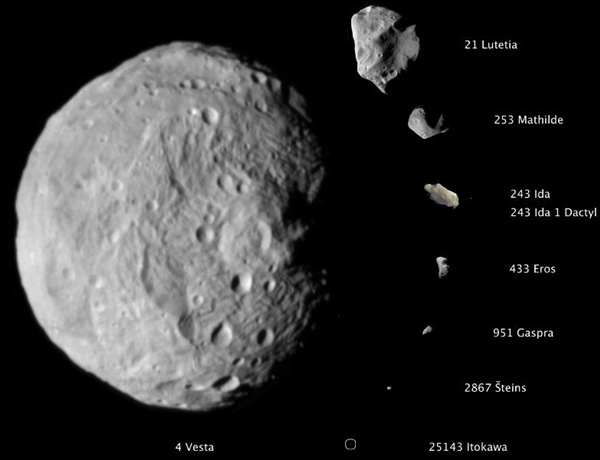 4 Vesta is the second largest (after Pallas), the most massive, and (as seen from Earth) the brightest asteroid in the solar system. It used to be the third largest and second most massive before the official status of Ceres changed from asteroid to dwarf planet in 1996. Vesta makes up about 9% of the total mass of the main asteroid belt between Mars and Jupiter. (Note: A number of Kuiper Belt objects, which are not classified as asteroids, are larger than Vesta.)

Vesta was discovered in 1807 by Heinrich Olbers and named for the ancient Roman goddess of the hearth. It was the subject of a close investigatation by NASA's Dawn spacecraft, which spent more than a year in orbit around it, from July 16, 2011 to September 5, 2012.


Should Vesta be reclassified?

Some scientists believe that Vesta should not be called an asteroid because it has a layered structure, with a crust, mantle, and core, making it more like a planet, such as Venus or the Earth. This differentiation came about because Vesta was big enough, shortly after its formation, for its own gravity to pull denser substances, such as heavy rocks and metals, down into the interior, leaving lighter substances nearer the surface. Vesta is much bigger than an ordinary, undifferentiated asteroid but not big enough to place it into the new category of dwarf planets (like Ceres or Pluto). Instead, some scientists think it should be called a "protoplanet" – an object that has some of the characteristics of a true planet but never gained enough mass to become one. Although it has suffered many collisions in its long life and has had numerous small bits broken off, it has remained essentially intact over billions of years.

Vesta has a basaltic surface composition and an average density not much less than that of Mars. Evidently lava once flowed here indicating that the interior was at one time molten. A deep impact crater 456 km wide (on a world itself less than 600 km across!), visible to the Hubble Space Telescope, has exposed the mantle beneath Vesta's outer crust, showing that Vesta has been differentiated into layers, like the terrestrial planets, and so must have had an internal heat source in addition to the heat released by long-lived radio-isotopes.

Not only can we peer (albeit dimly, for the moment) at Vesta's interior, but we have, scientists believe, quite a few samples of Vesta here on Earth. These consist of the so-called HED group of meteorites – the howardites, eucrites, and diogenites – which have spectral and geological fingerprints linking them to Vesta and to each other. But it's very unlikely that the HED stones came from Vesta directly. Vesta is located in a part of the main asteroid belt that makes it almost impossible for it to send meteorites to us. So there are probably intermediate asteroids, which were once part of Vesta, located in more favorable orbits that provide delivery. This theory has been bolstered by the discovery that the asteroid 1929 Kollaa, based on its reflectance spectrum, was once a part of Vesta, and, moreover, that it moves in an orbit from which meteorites could much more easily be launched Earthward.

The Dawn spacecraft went into orbit around Vesta on July 15, 2011, and carried out a detailed study of the asteroid for a period of more than a year before moving on to an encounter with Ceres in 2015. In preparation for the arrival of Dawn at Vesta, images of the asteroid were taken by the Hubble Space Telescope in 2007 which showed features as small as 60 km across, revealing variations in brightness and color across the asteroid's surface.

Scientists will continue to analyze the wealth of data returned by Dawn in an effort to learn more about the composition and history of Vesta.