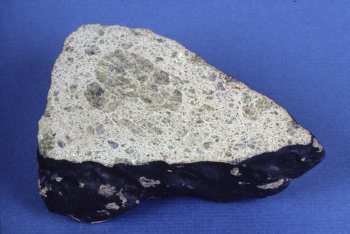 Piece of a diogenitite that fell near Johnstown, Colorado. It is brecciated and contains large orthopyroxene grains in a groundmass of crushed and broken orthopyroxene. The specimen is about 13 cm long. Photo by D. Ball, ASU.

Diogenite is a type of achondrite and a member of the HED group for which the parent body is believed to be the asteroid 2 Vesta. Diogenites are named for the Greek philosopher Diogenes of Apollonia who, in the 5th century BC, was the first to suggest that meteorites come from space (a realization that was subsequently forgotten for the next 2,000 years).

Diogenites consist mostly of magnesium-rich orthopyroxene, with smaller amounts of olivine and plagioclase. The pyroxene is often in the form of sizeable crystals, indicating that it cooled slowly, presumably within magma chambers deep within the crust of Vesta.

The Tatahouine meteorite, a unique diogenite that fell in small fragments Tunisia in 1931, is famous for its green, centimeter-sized pyroxene crystals.