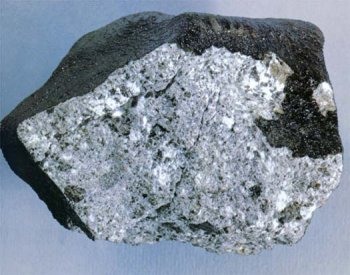 An achondrite that fell in Sioux County, Nebraska. This eucrite has been broken open, revealing the distinction between its black, shiny, and smooth fusion crust and its light-colored interior. The specimen is about 7 cm from left to right. Photo by J. Kurtzmen.

Achondrites are the rarer of the two main types of stony meteorite, accounting for about 9% of all meteorite falls. They are made of rock that has crystallized from a molten state.

Achondrites contain mostly one or more of the minerals plagioclase, pyroxene, and olivine, and generally, but not always, lack the small rounded inclusions known as chondrules that are typical of chondrites. Most achondrites are chemically similar to basalts and are thought to be the product of melting on large asteroids, moons, and planets. Soon after these worlds formed, they were heated from within and partially melted. Although this process is still active on Earth, it ended about 4.4 billion years ago on asteroids, 2.9 billion years ago on the Moon, and perhaps one billion years ago on Mars. Heating of the primordial mixture of stony minerals, metals, and sulfides (of which chondrites are made) produced liquids, the densest of which sank to become planetary or asteroidal cores. Lighter stony minerals rose and solidified to become basaltic rocks, fragments of which were subsequently broken off by impacts and hurled into space. More than 200 of these evolved achondrites have been found, covering a wide range of compositions and origins.

The so-called HED group includes the howardites, eucrites and diogenites, which appear to share the same parent body, believed to be the asteroid Vesta. Other evolved achondrites that seem to have come from partially differentiated asteroids other than Vesta have been mostly assigned to two distinct groups known as the angrites and the aubrites.

Although the majority of achondrites are of asteroidal origin, some are known to have come from the highland regions of the Moon's farside (see lunar meteorites) and from Mars (see Mars meteorites). NWA011, a meteorite found in the Sahara in 1999, is suspected of having originated on Mercury.

As well as the evolved achondrites, there's an entire group of primitive achondrites whose members are similar to chondrites in composition and have an age similar to that of the primordial chondrites. Primitive achondrites, which belong to the so-called PAC group, seem to have derived from small chondritic parent bodies that only partially melted and differentiated through accretion processes or from impact events, and then rapidly cooled. Following an initial heating phase, they quickly cooled to become geologically inactive.