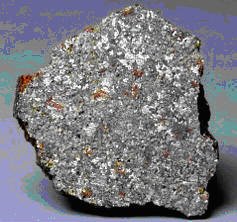 An acapulcoite is a primitive (little altered since its formation) achondrite belonging to a small group named after the only witnessed fall, the 1.9-kg Acapulco meteorite that fell in the province of Guerrero, Mexico (16° 53' N, 99° 54' W) on Aug 11, 1976. Acapulcoites are made mostly of fine-grained olivine, orthopyroxene, plagioclase, nickel-iron metal, and the iron sulfide, troilite. Their mineral composition is between that of enstatite chondrites and H-group chondrites, but they have an oxygen isotope pattern unlike that of other chondrite groups.

Some acapulcoites contain chondrules. These are especially abundant in the meteorite NWA725 found in Tissemoumine, Morocco. The presence of chondrules confirms the relatively unevolved nature of acapulcoites and that they represent a missing link between the two divisions of stony meteorites – chondrites and achondrites. They are thought to have come from the same parent body as the closely related lodranites, which show signs of having experienced more melting.