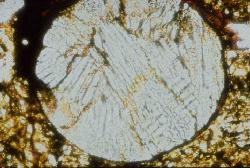 Cross-section of a chondrule in a small H5 chondrite found in about 1960 in Riverton, Manitoba.

A chondrule is a roughly spherical aggregate of coarse crystals formed from the rapid cooling and solidification of a melt at about 1,400°C. Large numbers of chondrules are found in all chondrites except for the CI group of carbonaceous chondrites. Chondrules are typically 0.5 to 2 mm in diameter and are usually composed of iron, aluminum, or magnesium silicates in the form of the minerals olivine and pyroxene, with smaller amounts of glass and iron-nickel. Together with calcium aluminium inclusions, which predate them by a couple of million years, they are among the oldest objects in the Solar System with an age of about 4.57 billion years. They formed when dusty regions of the solar nebula were heated to very high temperatures, became molten, and then resolidified as tiny droplets.