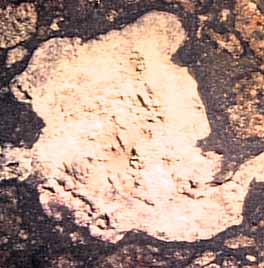 Calcium aluminum inclusion in a sample of the Allende meteorite.

Calcium aluminum inclusions (CAIs) are white, millimeter-sized objects found, often together with chondrules, in the most primitive kinds of chondrite meteorites, notably some types of carbonaceous chondrite. They consist of high-temperature minerals, including silicates and oxides of calcium, aluminum, and titanium.

In 2002, an international team of scientists accurately dated CAIs at 4.57 billion years, making them the oldest known objects in the solar system. The same team found that chondrules, another of the earliest relics of the solar system, are 2 to 3 million years younger than CAIs. Both types of object formed when dusty regions of the solar nebula were heated to high temperatures. The dust melted and then crystallized, forming first CAIs and then chondrules. Larger objects, like asteroids and planets, formed about 10 to 50 million years later.