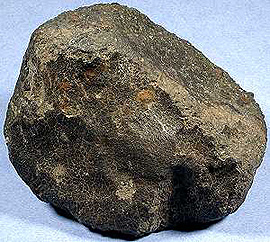 A fragment of the Allende meteorite. 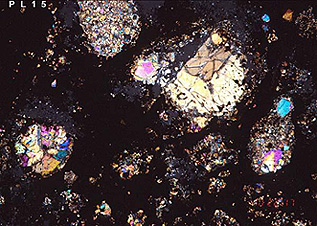 A thin section of the Allende meteorite showing a carbon-rich matrix around the chondrules.

The Allende meteorite is a meteorite of the type known as a carbonaceous chondrite, which fell near the village of Pueblito de Allende, in the Mexican state of Chihuahua, on Feb 8, 1969. Several tons of material were scattered over an area measuring 48 km by 7 km.

Specimens of the meteorite were found to contain a fine-grained carbon-rich matrix studded with many chondrules, both matrix and chondrules consisting predominantly of the mineral olivine. Close examination of the chondrules, by a team from Case Western Reserve University,1 revealed tiny black markings, up to 10 trillion per square cm, which were absent from the matrix and interpreted as evidence of radiation damage. Similar structures have turned up in lunar basalts but not in their terrestrial equivalent which would have been screened from cosmic radiation by the Earth's atmosphere and geomagnetic field. Irradiation of the chondrules, it seems, happened after they had solidified but before the cold accretion of matter that took place during the early stages of formation of the solar system, when the parent meteorite came together. The Allende meteorite also contains fine-grained, microscopic diamonds with strange isotopic signatures that point to an extrasolar origin; these interstellar grains are older than the Solar System and probably the product of a nearby supernova.