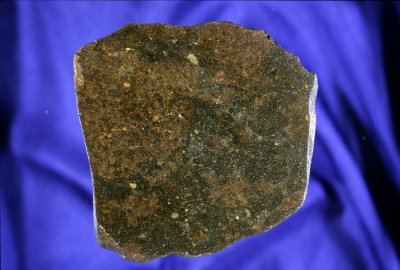 A piece of an ordinary chondrite that fell in Plainview, Texas. Visible in this cut and polished specimen are numerous small, round chondrules. The specimen measures about 10 cm from top to bottom. Photo by D. Ball, ASU.

A chondrite is a type of stony meteorite made mostly of iron- and magnesium-bearing silicate minerals that have remained little changed from the dawn of the Solar System, over 4.5 billion yr ago. Chondrites are the commonest kind of meteorite, accounting for about 86% of falls, and, because they come from asteroids that never melted or underwent differentiation, have, except for the lightest elements, hydrogen and helium, the same elemental composition as the original solar nebula.

Chondrites are so named because they nearly all contain chondrules – little round droplets of olivine and pyroxene that apparently condensed and crystallized in the solar nebula and then accreted with other material to form a matrix. The variation in chemical composition among chondrites reflects the fact that their parent bodies formed in different regions of the solar nebula and were further subjected to different thermal and chemical processes as well as to impacts with other asteroids.

The main groups are H, L, and LL, known collectively as ordinary chondrites, E, known as enstatites, and C, known as carbonaceous chondrites. Other, rarer groups, include the rumurutiites (group R), the kakangariites (group K), and the forsterites (group F).

Each group is further broken down into petrologic types 1 to 7. Types 1 and 2, which are represented only by carbonaceous chondrites, show evidence of having been chemically altered by water to the extent that chondrites are either absent (type 1) or rare (type 2). Petrologic types 3 to 7 have undergone varying degrees of thermal metamorphism, as shown by an alteration of the chondrules. Type 3 shows plentiful, unaltered and distinct chondrules, while the chondrules of types 4 to 6 are increasingly indistinct due to heat-caused chemical changes and recrystallization. Type 7 chondrites, in which chondrules are absent, are transitional between chondrites and primitive achondrites.