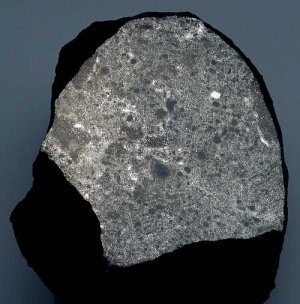 An enstatite (class EL 4-5) chondrite found in 1997 in the Ténéré du Tafassâsset, a part of central Sahara in the northeast of the Republic of Niger. The meteorite weighed 609 g; sectional plane 4.5 × 5 cm. Credit: Mineralogical Museum of the University of Hamburg, photo K.-C. Lyncker.

Enstatite is a common mineral belonging to the pyroxene group of silicates. It has the chemical formula Mg2Si2O6 being thus unusual among pyroxenes in that it is virtually iron-free. Enstatite and ferrosilite (Fe2Si2O6) form a complete solid solution series. Enstatite is found as rock-building material in basic and ultrabasic rocks such as gabbro, norite and peridotite. When it occurs in crystalline form, which is rare, it is as grayish green, light brown, white, or transparent crystals belonging to the orthorhombic system (three unequal axes at right angles to each other). Hardness 5.5; relative density 3.2–3.5.

Enstatite meteorites are the least common type of chondrite (stony meteorites containing submillimeter-sized inclusions called chondrules), accounting for only about 2% of the chondrites that fall to Earth. They are also unusual in that the iron they contain, which may make up to a quarter of their mass, appears in the form of metallic iron-nickel and as minerals containing iron sulfide. This is in marked contrast to other types of chondrite in which iron is combined with oxygen as oxides and silicates. Enstatite (E) chondrites also contain a variety of other minerals that can only form in extremely reducing (oxygen-poor) conditions, including oldhamite (calcium sulfide), niningerite (magnesium sulfide), perryite (iron-nickel silicide), and alkali sulfides. They are classified by petrologic grades 3 to 6 and divided into two groups by their iron content:

· EH (high metal) chondrites contain small (~ 0.2 mm) chondrules and high ratios of siderophile elements to silicon. More than 10% of the rock is composed of metal grains. About 3% by weight of the iron-nickel metal consists of elemental silicon.

· EL (low metal) chondrites contain larger (> 0.5 mm) chondrites and low ratios of siderophile elements to silicon. Only about 1% by weight of the iron-nickel metal consists of elemental silicon.

The fact that E chondrites contain the most refractory (least volatile) elements of any type of chondrite is a clue to their origin. One possibility is that they came from an asteroidal parent body which once orbited the Sun in the inner part of the Solar System, perhaps within the orbit of Venus or even that of Mercury. Alternatively, they may have originated further out in the inner part of the main asteroid belt when conditions there were much different than they are today. Astronomers have pointed to the environs of the young stars Beta Pictoris, for example, as an analog for the early Solar System. The dusty disk surrounding beta Pic is much more carbon-rich than are typical asteroids and comets in the Solar System today. Such conditions, it is thought, may have favoured the formation of the parent bodies from which enstatite meteorites came. Reflectance studies of some E chondrites show similarities with the surface composition of M-type asteroids such as Psyche.