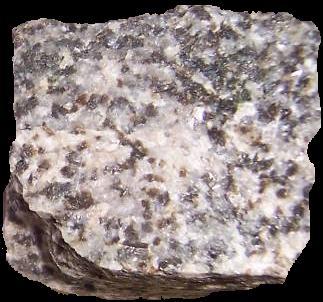 Norite is a coarse-grained basic igneous rock composed of essential calcic plagioclase and orthopyroxene. Norites also can contain up to 50% clinopyroxene and can be considered orthopyroxene dominated gabbro. Minor components can include biotite and hornblende. Norite is generally found in layered igneous intrusions formed by progressive crystal fractionation. The crystallization of large amounts of orthopyroxene can occur by the reaction of olivine with the magma. Norite is sometimes associated with anorthosite and troctolite. It is found extensively in the highland regions of the Moon.