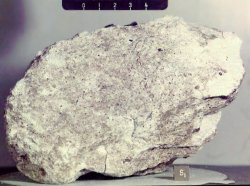 Anorthosite is a coarse-grained basic igneous rock made largely of plagioclase feldspar (95%), with small amounts of pyroxene (4%), olivine, and iron oxides. Usually light in color, it may have bands of darker minerals. Anorthosite forms deep underground, and in dikes and intrusions; it makes up about 60% of the Earth's crust. Anorthosite was found in all the rocks returned from the Moon, including the oldest (dating back 4.4 to 4.5 billion years), and is believed to make up a significant fraction of the lunar crust.