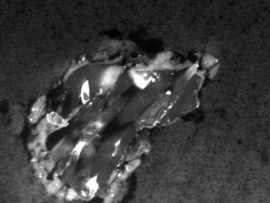 Forsterite is the magnesium-rich end-member of the olivine solid-solution series. It has the chemical formula Mg2SiO4 and is named for the German naturalist, Johann Forster. At the other end of the olivine series is the iron rich-mineral fayalite (Fe2SiO4). On Earth, forsterite is found in ultramafic igneous rocks or in marbles made from the metamorphism of dolomitic limestones. When it occurs as crystals it is called peridot.

Some forsterite also occurs in certain types of meteorites in which olivine is common. The olivine in most stony-iron meteorites ranges in composition from 60% to 85% forsterite with the remainder being fayalite.

The terms "forsterite chondrite" or "F chondrite" is also used to describe a type of inclusion that has been found in a handful of meteorites, including the Cumberland Falls aubrite, which fell in Whitley County, Kentucky in 1919, and the Antarctic meteorite ALHA78113. The way the forsterite and enstatite is associated in these specimens suggests that a small F chondrite parent body was violently disrupted by collision with an enstatite parent body, melted, and rapidly cooled. The fragments were then incorporated in an aubritic regolith, buried, and annealed under pressure to yield the breccia present in these meteorites today.

In 2005 tiny crystals of forsterite were found in cometary dust returned by NASA's Stardust probe.