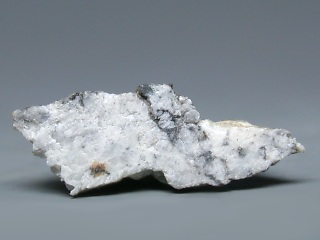 An aubrite is a type of achondrite (a stony meteorite lacking inclusions known as chondrules) composed mostly of the magnesium silicate mineral enstatite (Mg2Si2O6) – hence their alternative name enstatite achondrite. The group is named for the small Aubres meteorite that fell near Nyons, France, on September 14, 1836. Outside Antarctica only about 10 aubrites are known, mostly the result of witnessed falls.

Aubrites have distinctive pale-colored fusion crusts and white interiors, and crumble easy. As well as large white crystals of enstatite, they contain varying amounts of olivine, nickel-iron metal, troilite (iron sulfide), and a variety of unusual accessory minerals, which suggest that they cooled underground on their parent body under highly reducing (oxygen-free) conditions. The jumbled and broken nature of the crystals they contain also suggests that the parent body was subject to one or more violent impacts. Similarities with the mineralogy and oxygen isotopic composition of enstatite chondrites has led to the suggestion that aubrites might have formed by partial melting of an enstatite chondrite precursor.

Aubrites have the highest cosmic-ray exposure ages of any stony meteorites, ranging up to 120 million years. A study of isotopic compositions of the elements samarium and gadolinium suggests that this exposure happened in the interval between leaving the aubrite parent body and arriving on Earth, rather than during the time the rock was on the surface of the parent body. However, this conclusion poses challenges to models of the orbital dynamics of these meteorites and to the suggestion from other research that certain achondrites experience space erosion up to 5 mm every million years.

Comparisons of reflectance spectra of asteroids have revealed striking similarities between the aubrites and the main belt asteroid 44 Nysa (the largest E-type asteroid and the brightest asteroid known) and other E-type objects. A small near-Earth asteroid, 3103 Eger, which is the only known E-type NEA, is suspected of being the actual parent body of the aubrites.