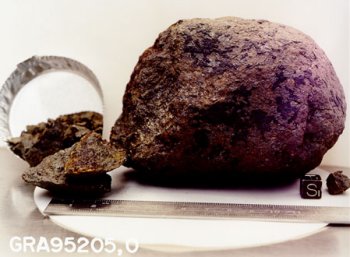 A ureilite found at Graves Nunataks, Antarctica. Dimensions: 10.5 × 7.5 × 7.5 cm. Mass: 1,460 g. The section shows shows an aggregate of anhedral to subhedral grains, up to 6 mm across, of olivine and pyroxene. Individual grains are rimmed by carbonaceous material which contains trace amounts of nickel-iron and troilite. Image and description: Johnson Space center.

A typical ureilite contains olivine and pyroxene (pigeonite, augite, or orthopyroxene) crystals, up to several millimeter across, embedded in a dark carbon-rich matrix of graphite and tiny diamond, low-nickel iron metal, troilite (iron sulfide), and iron carbide. Roughly a fifth of known ureilites are of a polymict or mosaicized variety in which the grain size is smaller. A handful of specimens are said to be bimodal because they contain a wide variety of grain sizes and minerals.

The origin of ureilites is controversial. According to one theory, they were formed in the interior of a parent body with cumulate crystals that formed crystal layers. Support for this comes from some ureilites in which the grains are aligned in a preferred orientation. Another suggestion is that ureilites represent a residuum of unmelted material after a partial melt liquid was drawn off. Yet other ideas are that they are unprocessed materials which never melted or that they are mixtures of carbonaceous chondrite and basaltic rock melts. It remains unclear whether ureilites originated on different parent bodies or in different regions of a single body. The presence of diamonds, which can form from graphite as a result of severe shock metamorphism, hints at a violent impact history.