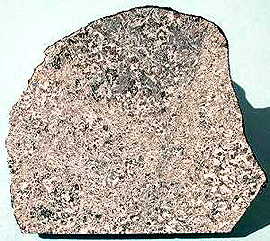 Eucrite is the most common class of achondrite meteorite and a member of the HED group for which the parent body is believed to be the asteroid Vesta. Eucrites are basalts – volcanic rocks of magmatic origin (see magma) – consisting mainly of pigeonite, a calcium-poor pyroxene, and anorthite, a calcium-rich plagioclase. Differences in mineralogy and chemistry have led to them being organized in three subgroups.

Non-cumulate eucrites are thought to have come from the upper crust of Vesta, which solidified on top of a magma ocean after the core and the mantle had formed. The rare cumulate eucrites seem to have derived from the gravitational settling of crystallized minerals, mainly pyroxene and plagioclase, within magma chambers below Vesta's early crust. Finally, the polymict eucrites are breccias that contain more than 90% eucritic clasts and less than 10% diogenitic clasts. This arbitrary 9:1 ratio is used to distinguish between polymict eucrites and the closely related howardites, which show a more even distribution of eucritic and diogenitic material.