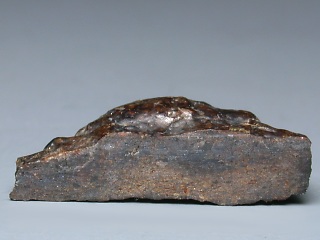 A brachinite is a member of small, puzzling group of primitive (little altered since their formation) achondrites composed mostly of the mineral olivine. Brachinites are named after the 0.2 kg Brachina meteorite that was found on May 26,1974 in the desert of South Australia (31° 18' S, 138° 23' E). They are among most olivine-rich of all meteorites with up to 93% olivine by volume. Only the Chassigny meteorite, which came from Mars, is richer in this green mineral. Indeed, the Brachina meteorite was originally classified as a chassignite. However, research published in 19831 revealed it to have trace element characteristics dramatically different from those of Chassigny, an oxygen isotopic signature similar to that of eucrites, and an age of about 4.5 billion years.

The Brachina meteorite is a fine-grained, unshocked igneous rock composed mostly of small, equigranular olivine grains interspersed with small melt inclusions. It contains 80% olivine, 5.5% clinopyroxene, 10% plagioclase, 0.5% chromite, 0.5% chlorapatite (see apatite), 3% iron sulfide, 0.3% pentlandite, and a trace of nickel-rich metal; orthopyroxene and anorthoclase-rich glass are found in the melt inclusions. The siderophile elements present are high in sulfides, and the oxidation state is similar to that of type LL ordinary chondrites. Compositionally, Brachina is close to the chemistry of type C2 carbonaceous chondrites, but has undergone some segregation of iron-nickel sulfide melt. It appears to be related to primitive meteorites, such as silicate inclusions in type IAB irons and winonaites, but is more oxidized. The likelihood is that it was formed during the beginning of melting in its parent body.

The Brachina meteorite was unique to science at the time its true nature became known in the early 1980s. Since then a handful of other brachinites have been discovered, including EET 942/947, Hughes 026, Eagle's Nest, Reid 013, ALH 80425, and NWA 595. Some recent research suggests that all may have been ejected, at various times, from the same, olivine-rich asteroid – 289 Nenetta.