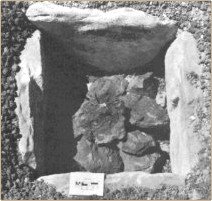 Winonaite is a class of primitive achondrite, named for one of the most unusual meteorite finds on record. It occurred at the site of an old native American village called Elden Pueblo (35° 12' N, 111° 24' W), 8 km (5 miles) northeast of Winona, Arizona, which is itself about 56 km (35 mi) west-northwest of the famous Barringer Crater (also known as Meteor Crater). A tribal people now referred to as the Sinagua occupied the village from around 1070 to 1275 before mysteriously disappearing. During the two centuries the pueblo complex was inhabited it grew from a few pit houses to a community spread over several acres. In 1928, during excavation of the site, archeologists discovered a 24 kg (53 lb) meteorite, the Winona meteorite, carefully buried in a specially designed stone cist in the floor of one of the rooms. The way in which it was wrapped, nearly duplicating the method of burial of a young child, suggests that the Sinagua considered the meteorite a sacred object, possibly after witnessing its fall.1,2

At the time of its discovery the meteorite was apparently a single, large, cohesive egg-shaped mass. However, upon its removal in 1928 it broke to pieces. This is somewhat surprising since, although the Winona meteorite is fragile, it had evidently survived its passage through the atmosphere intact and been moved by the pueblo-builders to the burial site where it lay undisturbed for over 700 years.

Winonaites are composed largely of fine-grained pyroxenes, with some magnesium-rich olivine, troilite (iron sulfide), and nickel-iron metal. They strongly resemble in compositions the silicate inclusions in type IAB iron meteorites. This similarity suggests that winonaites and IAB group irons may have come from the same parent body – a partially differentiated asteroid that suffered a catastrophic impact just as it was starting to form an iron core and a silicate-rich crust. According to this idea, the impact mixed silicates into molten nickel-iron forming the IAB irons, and mixed olivine-rich residues of partial melts into unmelted silicates, forming the winonaites.