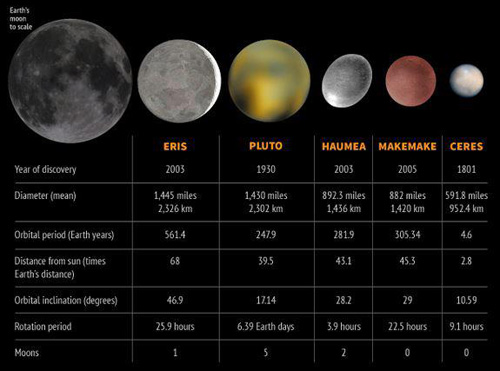 A dwarf planet is an object in orbit around a star, which satisfies all of the criteria of a planet except one – namely, it has not cleared the neighborhood around its orbit of small objects (known collectively as planetesimals). As well as orbiting a star, a dwarf planet justifies its status by not being a satellite and having sufficient mass for its self-gravity to pull it into a rounded shape, overcoming rigid body forces that would otherwise leave it irregular.

This definition of a dwarf planet was adopted by astronomers at a meeting of the International Astronomical Union in Prague on Aug 24, 2006. As a result, both Pluto (previously considered to be the smallest and outermost planet of the Solar System) and Ceres (previously considered to be the largest known asteroid) acquired dwarf planet status. Eris, a trans-Neptunian object on average three times more distant from the Sun than is Pluto, was also included in the initial list of dwarf planets. Since then it has been joined by two more trans-Neptunian objects: Haumea and Makemake.

Membership of the Solar System's dwarf planet family is likely to grow in the future. Already, there are several other strong candidates, including Quaoar, Sedna, Orcus, and Salacia.

All objects orbiting the Sun that are not planets or dwarf planets are referred to collectively as "small Solar System bodies".