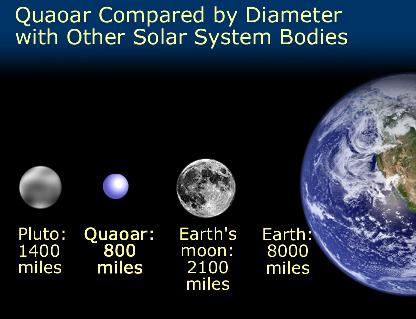 Quaoar's orbit (red) compared with the orbits of Pluto and the other planets (black). Credit: Chad Trujillo.

50000 Quaoar (KWAH-o-ar) is one of the largest known Kuiper Belt objects. It was discovered in Jun 2002 by Chad Trujillo and Mike Brown at the California Institute of Technology. It was provisionally named 2002 LM60 before being permanently named Quaoar after the creation force of the Tongva tribe who were the original inhabitants of the Los Angeles basin, where the Caltech campus is located.

Quaoar lies about 42 AU (6.5 billion km) away from us, more distant than either Pluto or Neptune, and moves in a nearly circular orbit with an eccentricity of less than 0.04, meaning that its distance from the Sun changes by only about 8% over the course of a Quaoar year (equal to 285 Earth years). This is very different from Pluto, which has an eccentricity about 6 times larger.

The diameter of Quaoar is roughly 1,200 km (740 mi), which is about the size of Pluto's moon Charon. This gives Quaoar a volume about the same as that of all the asteroids in the main asteroid belt put together.