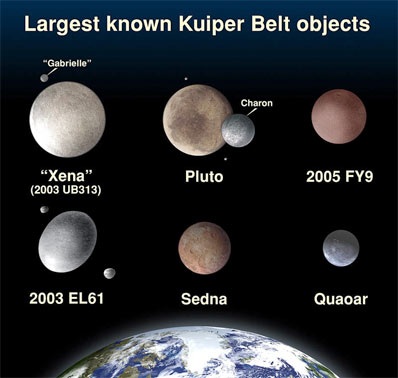 KBOs are important because they represent original samples of accreted material from the nebula from which the solar system formed. They fall into two distinct groups: those having eccentric orbits synchronized at a 3:2 ratio with Neptune's orbit, informally called plutinos, and those, in the vast majority, having larger, more circular orbits. According to one estimate, there may be 70,000 KBOs greater than 100 km in diameter – hundreds of times the number (and mass) of similar sized objects in the main asteroid belt – and billions of smaller ones.

The largest known KBO is Eris (formerly known as 2003 UB313), which is bigger than Pluto, followed by Pluto itself (normally considered to be planet but which appears to be a renegade KBO), and Orcus.

Occasionally the orbit of a KBO will be disturbed by the interactions of the giant planets so as to cause the object to cross the orbit of Neptune; it will then likely have a close encounter with Neptune that will send it out of the solar system altogether or, alternatively, into an orbit crossing those of the other giant planets. This probably explains the origin of the centaurs, which are very like giant cometary nuclei and move in unstable orbits between Jupiter and Neptune. Occasionally a centaur may be captured as a moon by one of the giant planets: this could be what has happened to Triton, which, if it were a refugee from the Kuiper belt, would be by far the largest one known.

The following table lists all known Kuiper belt objects with diameters that exceed or may exceed 1,000 km. Pluto and its moon, Charon, are included because, although they are normally spoken of as a planet and satellite, respectively, both have many features in common with KBOs.