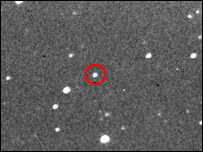 Periodic variations in the brightest of Haumea are thought to be due to its exceptionally elongated shape. 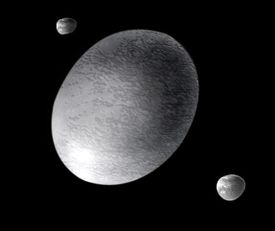 Artist's impression of Haumea and its two moons. (Separation distances not to scale).

Haumea is a large and unusual Kuiper Belt object (KBO) of the type known as a plutoid (a dwarf planet lying beyond the orbit of Neptune). Previously known as 2003 EL61, it has two moons, spins very fast, and appears to be cigar-shaped. It is estimated to be about as wide as Pluto along its longest dimension and about half that along its shortest. (See largest known Kuiper Belt objects.)

Haumea was discovered by a team from the California Institute of Technology consisting of Michael E. Brown, Chad Trujillo, and David Rabinowitz who had been observing the object for half a year with the 1.3-m SMARTS Telescope. The discovery was made on Dec 28, 2004 and announced in 2005. In Sep 2008, Haumea was named by the International Astronomical Union, after the goddess of childbirth and fertility in Hawaiian mythology.

In Sep 2005, researchers announced that Haumea was the fastest spinning large object known in the Solar System, rotating once every 3.9 hours. This means that instead of being roughly spherical, the object is stretched out into the shape of a squashed rugby ball. Knowing its shape, astronomers have deduced a density for Haumea more than 2.5 times that of water and a reflectivity similar to that of fresh snow. A spiraling-in effect of the object and its moons might have been be the cause of the high rotation rate. Alternatively the fast spin might be the result of a major impact in which the moons were created.


The moons of Haumea

Two satellites have been found in orbit around Haumea. Both were discovered in 2005 and are of substantial size.