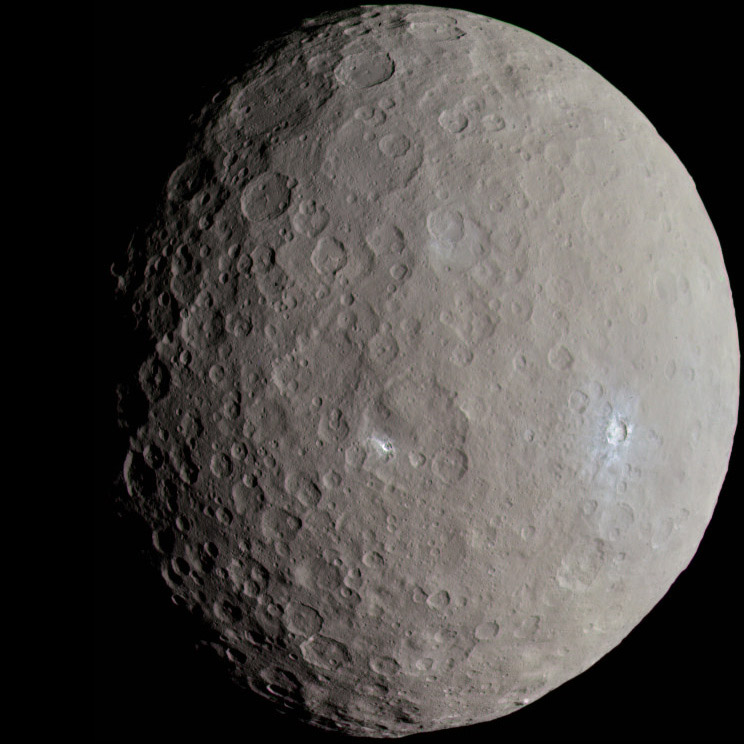 Approximate true-color image of Ceres made from images were acquired by Dawn on May 4, 2015, at a distance of 1,3641 km. The prominent, bright crater at right is Haulani. The smaller bright spot to its left is exposed on the floor of Oxo. 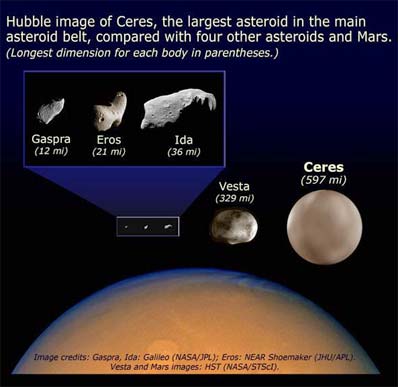 Ceres is a dwarf planet and the largest object in the main asteroid belt. Before it was elevated to dwarf planet in status in 2006, it was known as the largest asteroid in the Solar System, though it is exceeded in size by some Kuiper Belt objects. It was also the first asteroid to be discovered, by Giuseppe Piazzi on January 1, 1801.

Ceres contains about one third of all the mass in the main asteroid belt . With a surface composition probably similar to that of a carbonaceous chondrite, Ceres is so dark that if placed at the same distance as Vesta (the third largest asteroid, which has only 55% of Ceres' diameter but an albedo of 0.35) it would appear the fainter of the two; even so, Ceres reaches magnitude 7.4 at opposition, second only to Vesta. Its reflectivity and reflectance spectrum characteristics led to it being classified as a G-type asteroid

For a while after its discovery, Ceres was lost. The observations made by Piazzi before his new-found object entered the daytime sky were too few to allow an orbit to be calculated that was accurate enough to predict where the object would reappear when it moved back into the night sky. There matters might have stood were it not for the fact that Ceres lay at the heliocentric distance predicted by the Titius-Bode law and therefore seemed as if it might be the missing planet that Johann Bode argued must exist between Mars and Jupiter.

The discovery of Uranus in 1781 at a distance that closely fit the one predicted by the Titius-Bode law had already bolstered confidence that the law was valid. So convinced were some astronomers that Ceres was Bode's missing planet that, during an astronomical conference in 1796, they agreed to undertake a systematic search. This led Carl Gauss to develop, in 1801, a method for computing the orbit of an asteroid from only a few observations – a technique that hasn't been significantly improved since. Using Gauss's predictions, the German astronomer Franz von Zach recovered Bode's mystery world on January 1, 1802. Piazzi named it Ceres after the Roman goddess of grain and patron goddess of Sicily, thereby starting a tradition that continues to the this day: asteroids are named by their discoverers (in contrast to comets, which are named for their discoverers).

Observations by the Hubble Space Telescope at visible wavelengths in 2003–2004 and by the Keck Observatory at near-infrared wavelengths in 2006 showed some indistinct markings on Ceres. However, our knowledge about Ceres was revolutionised in 2015 with the arrival in orbit around the dwarf planet of Dawn.

Ceres has a generally, dark heavily cratered surface but it also has several, smallexceptionally bright features, the brightest and largest of which is in the middle of the 80-kilometer-wide crater Occator. The exact nature of the bright spots has yet to be determined but they appear to consist of some kind of salt, possibly sodium carbonate or a brine containing magnesium sulfate hexahydrite. The onlyha prominent mountain on Ceres, Ahuna Mons, appears to be a cryovolcano.