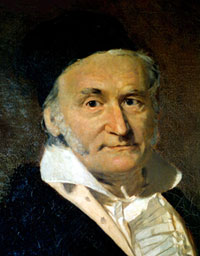 Carl Gauss was the foremost German mathematician of his generation and one of the greatest mathematicians of all time. Often referred to as the "Prince of Mathematics," his stature and range of interests rivaled those of Aristotle and Isaac Newton. Some inkling of what was in store came when, as a three-year-old, Gauss corrected a mistake in one his father's lengthy payroll calculations. In school, at age 10, when his teacher gave the class the task of adding all the integers from 1 to 100, Gauss immediately wrote down the correct answer, 5050, on his slate. He had spotted that the numbers can be paired off as (100 + 1), (99 + 2), (98 + 3), ..., (51 + 50) so that the problem reduces to multiplying 101 by 50. At age 19, Gauss proved that it was possible to construct a 17-sided regular polygon using on a straightedge and compass – a feat that had eluded the Greeks. A few years later a colleague of his supplied a method for actually performing the construction.

Then Gauss entered the mathematical stratosphere of his time by proving what is now called the fundamental theorem of algebra, namely, that every polynomial has at last one root that is a complex number; in fact, he gave four different proofs, the first of which appeared in his dissertation. In 1801, he proved the fundamental theorem of arithmetic (that every natural number can be represented as the product of prime numbers in only one way); published a brilliant tour de force on the properties of integers in his Disquisitiones Arithmeticae, which systematized the study of number theory; and showed that every number is the sum of at most three triangular numbers. In the same year, he also developed the method of least-squares fitting (for reducing experimental errors) and, though he didn't publish it, used this method to calculate the orbit of the asteroid Ceres, an object recently discovered by Guiseppe Piazzi, from only three observations. Gauss published his monumental treatise on celestial mechanics Theoria Motus in 1806.

In 1807 Gauss became director of the Göttingen Observatory and in 1809 published his quick method for calculating the orbit of Ceres. This enabled astronomers to recover the asteroid after it had become lost behind the Sun following its discovery. Gauss also worked out the theories of perturbations that were eventually used by Urbain Leverrier and John Adams in their independent calculations that led to the discovery of Neptune. After 1817 Gauss did no further work in theoretical astronomy, though he continued to work in positional astronomy for the rest of his life. The 1,001st asteroid to be discovered was named in his honor.

He became interested in the compass through surveying, and developed the magnetometer, an instrument with which, together with Wilhelm Weber, he measured the intensity of magnetic forces. With Weber, he also built the first successful telegraph. (The gauss (Gs) unit of magnetic flux is named after him.)

The story has often been repeated that Gauss proposed a method of signaling to either the Moon or Mars (see communication, with the Moon and planets). In one version of this, he is supposed to have suggested that lanes of forest be planted in Siberia in the form of a huge right-angle triangle with squares on each side (as in Euclid's demonstration of Pythagoras's theorem) as a means of revealing our presence to any inhabitants of the Moon. There is no direct evidence he ever did this. However, he was a believer in pluralism and, following his invention of a heliotrope (a device for signaling in which a mirror reflects sunlight), he commented on the possibly of using it to contact lunarians. In a letter to Olbers in 1822, he wrote:

With 100 separate mirrors, each of 16 square feet ... one would be able to send good heliotrope-light to the moon... This would be a discovery even greater than that of America, if we could get in touch with our neighbors on the moon.

Gauss also remarked, in a letter to Alexander von Humboldt (1854), on the antipluralist views of William Whewell: "it would ... be very precipitous to deny without elaborate argumentation all inhabitants to the moon".

Unfortunately for mathematics, Gauss reworked and improved papers incessantly, and, in keeping with his motto "pauca sed matura" (few but ripe), he published only a fraction of his work. Many of his results were subsequently repeated by and attributed to others, since his terse diary remained unpublished for years after his death. Only 19 pages long, this diary later confirmed his priority on many breakthroughs, including work on an alternative to the parallel postulate, which really makes him the earliest pioneer of non-Euclidean geometry despite the fact that Janos Bolyai and Nikolai Lobachevsky are normally given this accolade. Gauss did, however, publish his seminal treatment on differential geometry in Disquisitiones circa superticies curvas, and Gaussian curvature is named for him. Gauss wanted a heptadecagon placed on his gravestone, but the carver refused, saying it would be indistinguishable from a circle. The heptadecagon appears as the shape of a pedestal with a statue erected in his honor in his home town of Braunschweig.