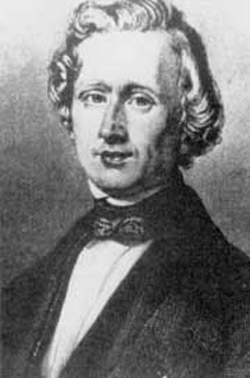 Urbain Le Verrier was a French mathematician and astronomer who, beginning in 1838, studied the causes of perturbations in the Solar System. His work led to improved knowledge of the masses of the planets, the scale of the Solar System, and the velocity of light. He also predicted the existence of two new planets – one of which was subsequently confirmed.

In 1845, Le Verrier learned from François Arago of certain irregularities in the movements of Uranus, which hinted at the existence of an eighth planet. His calculated position of this perturbing body enabled Johann Galle to confirm it observationally, though John Adams had made a similar but unpublished prediction some months earlier. Le Verrier, not one to avoid publicity, suggested that Uranus be renamed for Herschel, the finder, and that the new discovery be named after himself. In the event, man lost out to (Roman) god and the eighth planet was called Neptune. Le Verrier's other prediction, first made in 1845, was for a new innermost planet, which became known as Vulcan. Searches turned up nothing and we now know that the irregularities in Mercury's orbit are an effect of general relativity.