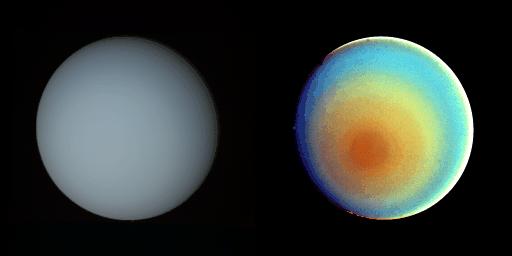 Two views of Uranus, one in true color (left) and the other in false color, compiled from images returned Jan 17, 1986, by Voyager 2. The spacecraft was 9.1 million km (5.7 million mi) from the planet, several days from closest approach. 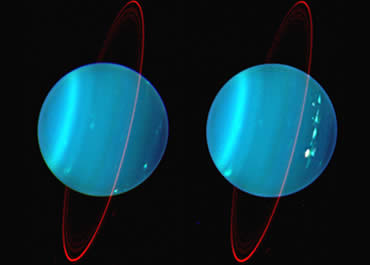 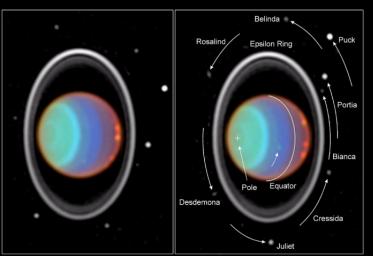 False-color images taken with the Hubble Space Telescope's Near Infrared Camera and Multi-Object Spectrometer revealing six distinct clouds on Uranus. The right-hand image, taken 90 min after the left-hand image, shows the planet's rotation. At near-infrared wavelengths, absorption by gases in the Uranian atmosphere limits the view to different altitudes, causing intense contrasts and colors. The blue exposure probes the deepest atmospheric levels. Blue indicates clear atmospheric conditions, prevalent at mid-latitudes near the center of the disk. The green exposure is sensitive to absorption by methane, indicating a clear atmosphere; but in hazy atmospheric regions, the green color is seen because sunlight is reflected back before it is absorbed. The green color around the south pole (marked by "+") shows a strong local haze. The red exposure reveals absorption by hydrogen, the most abundant gas in the atmosphere of Uranus. Most sunlight shows patches of haze high in the atmosphere. A red color near the limb of the disk indicates the presence of a high-altitude haze. The purple color to the right of the equator also suggests haze high in the atmosphere with a clear atmosphere below. The five clouds visible near the right limb rotated counterclockwise during the time between both images. They reach high into the atmosphere, as indicated by their red color. Features of such high contrast have never been seen before on Uranus. The clouds are almost as large as continents on Earth. Another cloud rotated along the path is shown by a white arrow and is located at lower altitudes, as indicated by its green color. The rings of Uranus are extremely faint in visible light but quite prominent in the near infrared. The brightest ring, the epsilon ring, has a variable width around its circumference. Its widest and thus brightest part is at the top in this image. Two fainter, inner rings are visible next to the epsilon ring. Eight of the small Uranian satellites, discovered by Voyager 2, can be seen in both images. 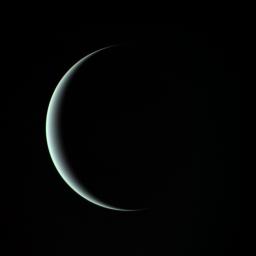 A view of Uranus taken by Voyager 2 as it headed away from the planet. This image is the result of combining the data obtained through three color filters. 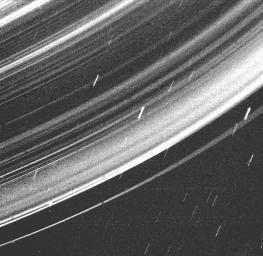 This dramatic Voyager 2 picture reveals a continuous distribution of small particles throughout the Uranus ring system. Voyager took this image while in the shadow of Uranus, at a distance of 236,000 km (142,000 miles) and with a resolution of about 33 km (20 miles). This unique geometry – the highest phase angle at which Voyager imaged the rings – allows us to see lanes of fine dust particles not visible from other viewing angles. All the previously known rings are visible here however, some of the brightest features in the image are bright dust lanes not previously seen. The combination of this unique geometry and a long, 96-sec exposure allowed this spectacular observation, acquired through the clear filter of Voyager's wide-angle camera. The long exposure produced a noticeable, non-uniform smear as well as streaks due to trailed stars. 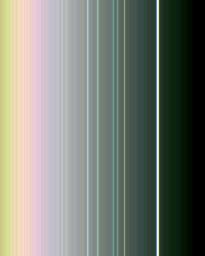 A false-color view of the rings of Uranus made from images taken by Voyager 2 on January 21, 1986, from a distance of 4.17 million km (2.59 million miles). Nine genuine rings are visible; the fainter, pastel lines seen between them are artifacts of computer enhancement.

Uranus is the seventh planet from the Sun and the third largest of the gas giants (narrowly beating out Neptune) with a diameter about four times that of Earth.

Uranus was discovered by William Herschel in 1781. Others had seen it earlier – at its brightest it is just visible to the naked eye – but had taken it to be a star because it doesn't move perceptibly from one night to the next. The earliest recorded sighting was in 1690 when John Flamsteed catalogued it as 34 Taurus. William Herschel originally called it Georgium Sidus (George's Star) in honor of King George III, while French astronomers began calling it Herschel. It was Johann Bode who proposed the name Uranus, after the Greek god of the heavens, but this didn't come into common usage until around 1850.

Uranus's most extraordinary feature is the tilt of its axis – almost 98° (or 82° if it is taken to be retrograde), so that the planet effectively spins around on its side. As a result, for part of its orbit, one pole continually faces the Sun while the other is in total darkness. Half an orbit later, the roles (and poles) are reversed. In between, the Sun rises and sets around the equator normally. For Uranus to be in such a position, it was almost certainly struck a formidable blow by another massive object. Since the plane containing its 13 rings and 27 known moons is similarly tilted, this impact presumably took place during or shortly after the accretionary phase of the planets.

Uranus probably has a solid, rocky core, surrounded by a deep layer of ammonia and water that has condensed into an icy slush. The outer layer is made up primarily of liquid hydrogen and helium.

The atmosphere of Uranus is composed of hydrogen (83%), helium (15%), methane (2%), and trace amounts of acetylene and other hydrocarbons. Its bluish hue stems from an upper methane haze that absorbs strongly at red wavelengths – leaving a featureless blue planet in our telescopes. During Voyager 2's flyby in 1986, Uranus's banded cloud patterns were extremely bland and faint; more recent Hubble Space Telescope observations, however, have shown a more strongly banded appearance now that the Sun is getting closer to being directly overhead at Uranus' equator, a position it will assume in 2007.

A single image of Uranus taken in 2004 shows 18 distinct cloud systems – eight more than Voyager saw during its entire months-long flyby. And one set of images taken with the Keck II telescope in Hawaii in summer 2004 shows an extremely bright cloud reaching up high above the planet's opaque methane layers in its southern hemisphere.

Until 10 years ago, the only pictures sharp enough to show any cloud features were those from Voyager. But then images from the Hubble Space Telescope began to exceed Voyager's resolution, and over the past four years images from the 10-m Keck telescope, using its new adaptive optics system and an infrared camera, have done even better. These observations have shown that some storm systems on Uranus come and go within days, while others can persist for years. The fastest winds ever recorded, seen in late 2003, were up to 420 km/h.

Uranus's magnetic field is odd in that it isn't centered on the center of the planet and that is tilted almost 60° with respect to the axis of rotation. It is probably generated by motion at relatively shallow depths within Uranus. (Neptune has a similarly displaced magnetic field, suggesting that this is not necessarily a result of Uranus's axial tilt.) The magnetosphere is twisted by the planet's rotation into a long corkscrew shape behind the planet.

Uranus has 27 known moons, placing it third, by this reckoning, behind Jupiter (69) and Saturn (62). The first two were discovered by William Herschel in 1787, and named, by his son, after characters from Shakespeare's A Midsummer Nights Dream, Titania and Oberon. Two more moons were found by William Lassell in 1851 and named Ariel and Umbriel; G. Kuiper discovered Miranda in 1948. All the moons of Uranus are named after characters from Shakespeare or Alexander Pope. Voyager 2's flyby in January 1986 led to the discovery of another 10. Twelve additional moons have since been discovered by telescope.

In an unusual move, in late 2001, the International Astronomical Union stripped the title of "moon" from a small body seen in images taken by Voyager and previously reported to be orbiting Uranus. The IAU concluded that there wasn't yet enough data to confirm that the object, designated S/1986 U10, is a satellite. It appeared to be in nearly the same orbit as another moon, Belinda, about 75,000 km from Uranus, and, based on its brightness in the Voyager images, to have a diameter of about 40 km. S/1986 U 10 has not been seen since the Voyager 2 discovery, despite observing efforts that have discovered several other small moons orbiting the planet.

Two of the most recently discovered satellites, Cupid (S/2003 U1) and Mab (S/2003 U2), belong to the inner collection of satellites, each orbiting Uranus in less than a day. Indeed, it's hard to understand how the inner swarm of 13 Uranian moons, which are so close together that they must be gravitationally unstable, can coexist. All the moons from S2001/U3 out move in retrograde orbits.

Uranus has a faint system of 13 narrow, elliptical-shaped rings, composed of dark dust and rocks up to about 10 m in diameter. The ring system was discovered in 1977, during an occultation of a star by the planet. As the star first approached and then receded behind the planet it appear to blink off and on – a blinking found to be due to a system of rings.